Ferguson is a Scottish-Irish surname and given name. The surname is a patronymic form of the personal name Fergus. The name Fergus is derived from the Gaelic elements fear (“man“) and gus(“vigor,” “force,” or “choice“). Thus the name “Ferguson” literally means the “son of a man of force/vigor” (the “male offspring of a strong powerful father“).

In 2014, the word “Ferguson” now symbolizes deeper meanings. It may soon mean a time of hellish behaviors, across the USA. Yes, I am not the only one predicting that “all hell may break loose,” asThe Economist considered the coming days.

On Sunday night, November 23, 2014, protesters wrote The Hunger Games-inspired graffiti on a local St. Louis landmark, which read: “If we burn, you burn with us.”

It was scrawled on an arch in the Shaw neighborhood of the Missouri city. The slogan is from Hunger Games Mockingjay Part 1. The arch that was vandalized is known as the Flora Place Gates and was built in 1897, helping sparking the development of Shaw, Missouri. Nearly a century later the neighbourhood was identified as a historic district because of its period architecture. Source.

Michael Brown, an unarmed 18-year-old black adolescent, was shot (reportedly six times) and killed on Saturday, August 9, 2014, by Darren Wilson, a police officer, in Ferguson, Missouri, a suburb of St. Louis. The St. Louis County grand jury made a decision and announced on Monday, November 24, 2014, that there is no indictment of Officer Wilson. The predicted outcome of this decision is nationwide demonstrations, with some rioting and civil unrest.

Ferguson had its start in 1855 when William B. Ferguson deeded 10 acres (4.0 ha) of land to the Wabash Railroad in exchange for a new depot and naming rights. The settlement that sprang up around the depot was called Ferguson Station. Ferguson was the first outside station connected to St. Louis, Missouri. Ferguson was incorporated as a city in 1894.Others have seen synchromystic links to Ferguson.

Ferguson, Missouri (northeast St. Louis), sits precisely midway between Cairo, Illinois (“Little Egypt”) and Hannibal, Missouri (the Hannibal name is related to Baal as well as the archetypal enemy of ancient Rome). Ferguson is also precisely in the middle of two alignments of Route 66, the I-270 frontage road to the north, and I-70 to the south.Source.

Little Egypt is an area steeped in mysticism.

Little Egypt is a regional name for southern Illinois. The most populated city is Belleville.

The nickname “Egypt” may have arisen in the 1830s, when poor harvests in the north of the state drove people to Southern Illinois to buy grain. Others say it was because the land of the great Mississippi and Ohio River valleys were like that of Egypt’s Nile delta. The nickname may date back to 1818, when a huge tract of land was purchased at the confluence of the rivers and its developers named it Cairo. Today, the town of Cairo still stands on THE PENINSULA

where the Ohio River joins the Mississippi. Other settlements in the area were also given names with Egyptian, Greek or Middle Eastern origins: The Southern Illinois University Salukis sports teams and towns such as Metropolis, Thebes, Dongola, Palestine, Lebanon, New Athens, Sparta, and Karnak show the influence of classical culture….Egyptian names were concentrated in towns of Little Egypt but also appeared in towns further south. For instance, about 100 miles (200 km) south of Cairo, along the Mississippi, lies Memphis, Tennessee, named after the Egyptian city on the Nile. Source.

The skyward symbol of the Ferguson area is the Gateway Arch. 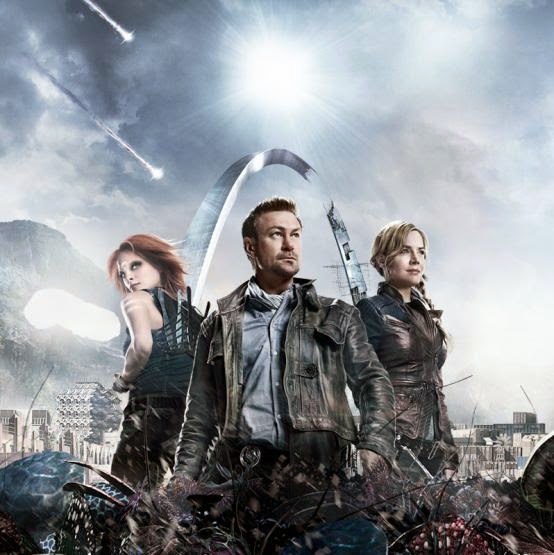 Eero Saarinen working with a model of the arch in 1957.

St. Louis’s Gateway Arch is very relevant too (via Ferguson, of course). Note that the City is known as “Gateway to the West.” So, you know where that goes. The west = Osiris = Underworld portal = Gate of Hell. ~  Source.

Eero Saarinen’s futuristic designs are significant and iconic. His TWA JFK Flight Center opened in 1962 and has been somewhat preserved in the redesigned JetBlue JFK T5, which retains parts of the Saarinen terminal (head house).

In discussing the significance of all the tridents being seen in 2014, via various news stories, this is intriguing:

I’d [Goro would] say, [this] is at the core of what the trident motif alludes to…The opening of the Gates of Hell. Source.

Some ideas about the Gateway Arch are far from the mainstream, of course. Take, for example, the Remove The Veil insight that… 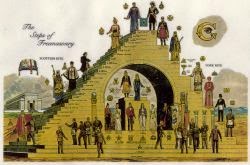 [More about fleur-de-lis (“flowers of the lilies”) here.]

Then, there’s the link to Freemasonry too:

The Gateway Arch is said to be an inverted catenary, because its curve arches up instead of hangs down. As Robert Hooke (essentially) wrote in 1675 about the relationship between a perfect arch and a hanging chain: “As hangs the chain, so stands the arch.”
Perhaps coincidentally, from a purely symbolic perspective, in Freemasonry one finds the astrologically-based Royal Arch of Heaven. Alfred E. Waite, in his New Encyclopedia of Freemasonry, specifically mentions the Catenarian Arch:
“There are two points from which this form of arch can be approached; the first is that of architecture, and it is proverbial in this respect that there is no curve in Masonry which approaches the catenary in strength; as regards the second, it is summarized in the simple statement that in its due and proper arrangement every Royal Arch Chapter approaches as nearly as possible the form of a catenarian arch. Of all that arises herefrom and belongs hereto it is not possible to speak: the motto is: Come and See.”Source. 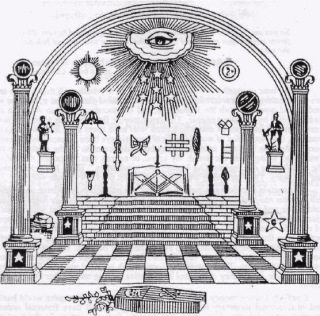 Update: By pure coincidence, after I posted this, Theo Paijmans tweeted the above image, showing that this royal arch was used on the “Masonic Apron presented to Gen. Washington by Madame LaFayette.”

This brings forth another view:

The trident – at once a symbol of disintegrating fire/lightning and of gnashing teeth – is a liminal (threshold) symbol. To put it differently, the teeth are the gatekeepers of the mouth – one of the sacred “nine bodily gates” in Tantric sex-magic. The teeth/mouth are a gateway into the digestive system, which facilitates the breakdown of matter for use by the body. Source.

Thoughts have been shared about how close to home this is:

One synchronicity, though: the trident is the symbol of the university where I [Kenn Thomas] work. I live near the university, home and office near the rioting, although not quite in Ferguson. Source.

How about all with the name Ferguson popping up?

On Saturday, June 28, 2008, at Six Flags Over Georgia, 17-year-old Asia Leeshawn Ferguson of Springfield, South Carolina, scaled two six-foot fences and passed through restricted areas posted as dangerous to visitors. Ferguson jumped the fences and was then decapitated by the Batman roller coaster. Source.

Where is all of this leading?

Is it a bit of a sad irony that the line from Crosby, Stills, Nash & Young’s 1970 hit Ohio– “Tin soldiers and Nixon’s comin’ …” could apply today, as Missouri Gov. Jay Nixon deploys National Guard troops into the fractured St. Louis suburb of Ferguson? Source.

Now the future begins, in earnest.. 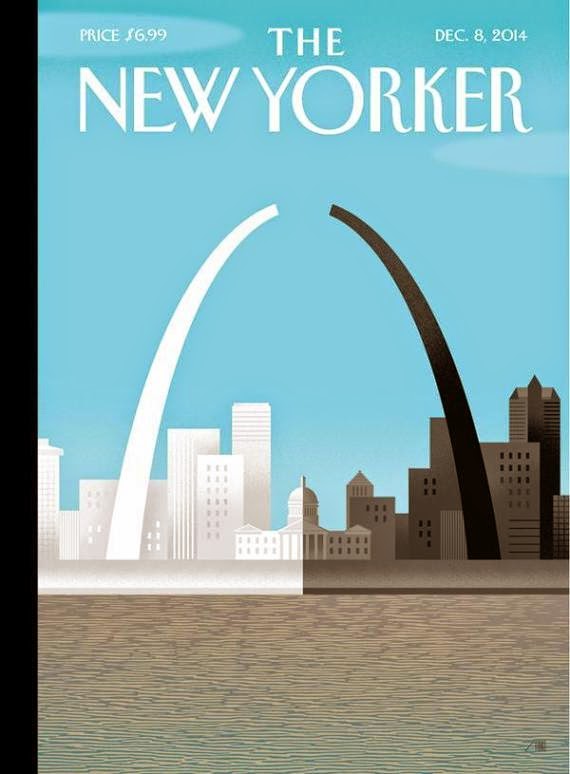 Hot on the heels of my essay, “Gateway Arch to Hell: Ferguson in Trident Times,” the structure is in the news again. I posted that selection on November 24, 2014, immediately after the non-indictment decision, regarding the shooting of Michael Brown, was made. As widely predicted, demonstrations, fires, and rioting occurred in 130 cities.

On November 26, it was announced the new issue of The New Yorker would have a cover illustration (above) by Bob Staake that shows the Gateway Arch as a broken landmark, white and black, with a missing top section. It symbolizes the racial tension in St. Louis due to the Ferguson situation. 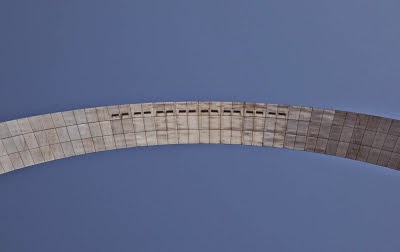 Now comes word on November 27 (American Thanksgiving) – via an unsealed indictment – that a plot was sidetracked that would have caused a bomb to go off in exactly the above shown, missing section of the Gateway Arch.

Two St. Louis men ​plotted to bomb the Gateway Arch and murder the Ferguson police chief and prosecutor who handled Michael Brown’s case​. They had obtained one pipe bomb. They had plans to obtain two others.

Brandon Orlando Baldwin (also known as Brandon Muhammad – above) and Olajuwon Ali Davis (also known as Olajuwon Ali and Brother Ali) ​were allegedly ​planning to plant a bomb inside the observation deck of the ​iconic ​Arch, sources told the St. Louis Post-Dispatch.

A November 21st report of their arms-related arrest mentioned their links to the New Black Panther Party. They allegedly acquired two Hi-Point .45 ACP pistols for someone else, at Cabela’s hunting gear store​ in Hazelwood, Missouri.

​After that arrest, the plot to bomb the Gateway Arch was revealed, but whether they were going to use the explosive to kill St. Louis County Prosecuting Attorney Robert McCulloch and Police Chief Tom Jackson is unknown.​

Davis/Ali describes himself as a “Moorish American,” and a member of the Moorish Science Temple of America.

The New Black Panther Party issued a statement calling the allegations regarding bombing and killing “totally unfounded” and were “baseless and have no merit.”

The links to “Little Egypt” and the area are recalled, of course, with these “Moorish” threads and Brandon Muhammad’s fashion choices.

Intriguing that one of the bomb plotter’s first name is Brandon. It is Jim Brandon who notes, in hisThe Rebirth of Pan: Hidden Faces of the American Earth Spirit (Dunlap, IL: Firebird Press, 1983), that the Gateway Arch location is across from the Cahokia Mounds complex. The Cahokia group includes the Monks Mound, the largest pyramid north of Mesoamerica. Its base circumference is larger than the Pyramid of the Sun at Teotihuacan.

“Which naturally leads me to ask who, then, built the more than one hundred conical, ridgetop, and platform mounds that once stood here, plus several dozens more in outlying areas and across the Mississippi precisely where the Gateway Arch now stands?” writes Brandon.