Vermin Love Supreme[1] is an American performance artist and activist who is known for running as an alternative candidate in various local, state, and national elections in the United States.[2][3][4] Supreme is known for wearing a boot as a hat and carrying a large toothbrush.[5] He has said that if elected President of the United States, he will pass a law requiring people to brush their teeth.[2][6][7][8] He also campaigned in 2012 on a platform of zombie apocalypse awareness (and zombie-based energy plan) andtime travel research,[9] and he promises a free pony for every American.[10] Supreme claims to mock the political system.[2][11] In 2011, he participated in the Occupy Boston protests.[12]

Supreme, who does not disclose his birth name,[citation needed] was born in and grew up near Boston, Massachusetts[13] and is said to be the oldest of three children.[1] He graduated from Gloucester High School in the 1980s, then moved to Baltimore to attend art school, but he dropped out and began booking bands for underground clubs.[14]

In 1986, he joined the Great Peace March for Global Nuclear Disarmament in protest of nuclear weapons.[1] From 1987 onward, he began running for public office.[15] He legally changed his name to Vermin Supreme in the 1990s while still in Baltimore.[1]

In 2006, Supreme donated one of his kidneys to save his mother.[1] He is married and has no children.[1]

Supreme discussed his political views in a 2008 promotional video. He stated he was registered as a Republican at that time, but that he leaned toward anarchism. He asserted that libertarians “are just about abolishing the government and letting shit fall where it may”,[16] which he called a mistake; he also asserted that Republicans want to nullify the government, but “offer no alternative to helping people other than charity”.[16] Supreme’s vision of anarchism holds no need for government, but depends on citizens to take responsibility for themselves and for others, citing “mutual aid and support and care to our fellow citizens” as key elements. To that end, Supreme called for a gradual dismantling of the government, while citizens take up the slack. He asserted that Americans do not know anymore how to be citizens, placing some of the blame on schools that teach in “very twisted and jingoistic fashion”.[16]

In the video, Supreme discussed his presidential campaign. He describes his “joke humor” campaign as a response to the lies people are fed by the media and by the government.[16] 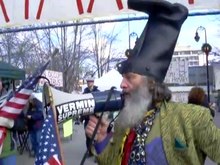 Vermin Supreme working the crowds during the New Hampshire primary

Supreme campaigned in the Washington, DC Presidential primary in 2004,[15] where he received 149 votes.[17]

Supreme glitter bombs Randall Terryduring a forum at the New Hampshire Institute of Politics at Saint Anselm College in December 2011.

The following are some of the milestones in this campaign:

Supreme is making another presidential run in 2016.[35] He has embarked on a tour of 20 cities to build support for his campaign and is seeking to qualify for matching funds from the Federal Election Commission (FEC).[35][36]

Supreme co-wrote and stars in the 2009 film Vote Jesus: The Chronicles of Ken Stevenson in which he poses as a right-wing political candidate to gain access into the world of American fundamentalism.[37][38]

In 2012, Supreme starred in a web series entitled Learnin’ With Vermin that uses a fictional version of his presidential campaign as a platform to teach political concepts such as voting methods.[39]

A documentary following Supreme on the 2012 campaign trail and exploring his life and work as an activist and political prankster called Who Is Vermin Supreme? An Outsider Odyssey was funded through a Kickstarter campaign and premiered at the Minneapolis St. Paul International Film Festival on April 9, 2014.[40] The film was directed by Minneapolis-based filmmaker Steve Onderick and features founder of the Rent is Too Damn High Party, Jimmy McMillan, and Boston-based singer-songwriter and comedian Rob Potylo.[41] [42]