* Many people killed in restaurant by a man with Kalashnikov near Place de la République, according to reports.

* There appear to be two more shooting sights as well as a large explosion also reported near stadium, where reportedly grenades were used.

* NOW, around 100 people reportedly  killed during the attack on the Bataclan concert venue in Paris, French media reported. One official described carnage inside the building, saying the attackers had tossed explosives at the hostages.

The date is significant. It always is in a terror attack. 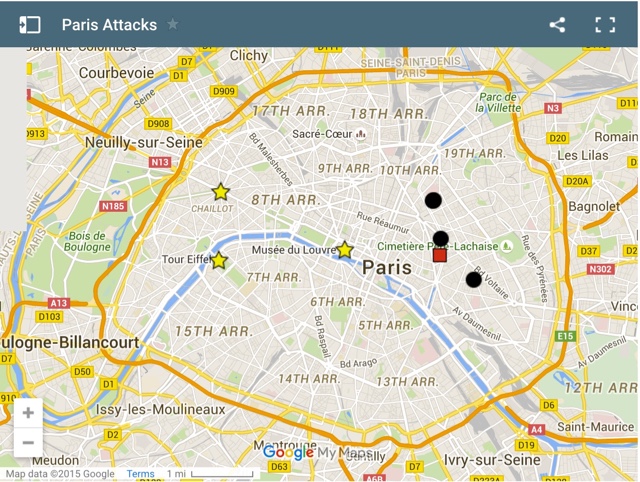 One media report dramatically summarized what happened, as if it was a cinematic plot. One eyewitness said the police on the street, creeping towards the Bataclan, looked like “they were in a movie.”

“On a night when thousands of Paris residents and tourists were reveling and fans were enjoying a soccer match between France and world champion Germany, horror struck in an unprecedented manner. Terrorists — some with AK-47s, some reportedly with bombs strapped to them — attacked sites throughout the French capital and at the stadium where the soccer match was underway.”

What do we know about November 13th?
At least 6 coordinated attacks occurred. Sky News is saying 158 were killed in Paris. All attackers have been killed by law enforcement officers or died by suicide, states Fox News, after reports circulated all night that some were still at large.
Update: By November 14, 2015, the number of deaths was restated as 128 people killed by the terrorists. Reportedly, 8 terrorists were known dead, with 7 of them dying by suicide. 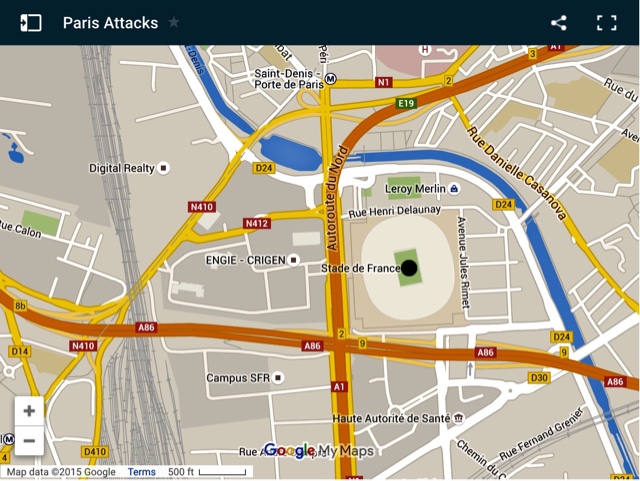 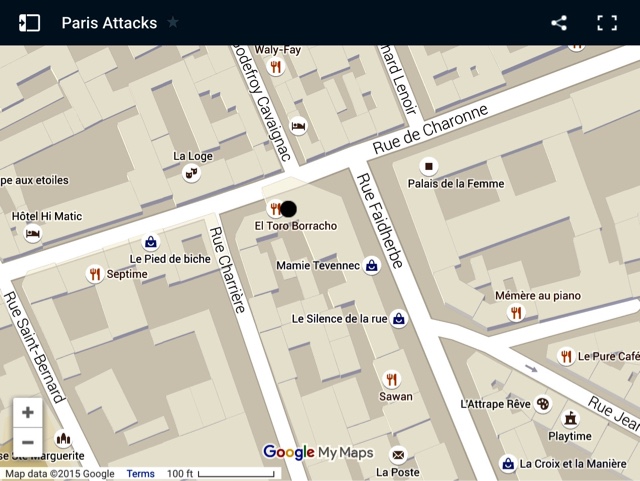 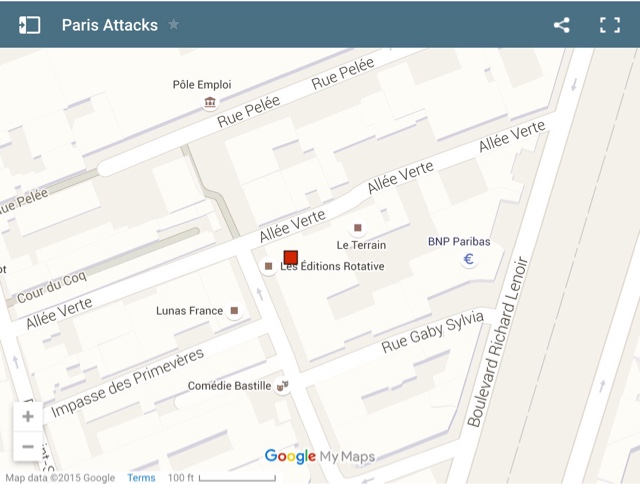 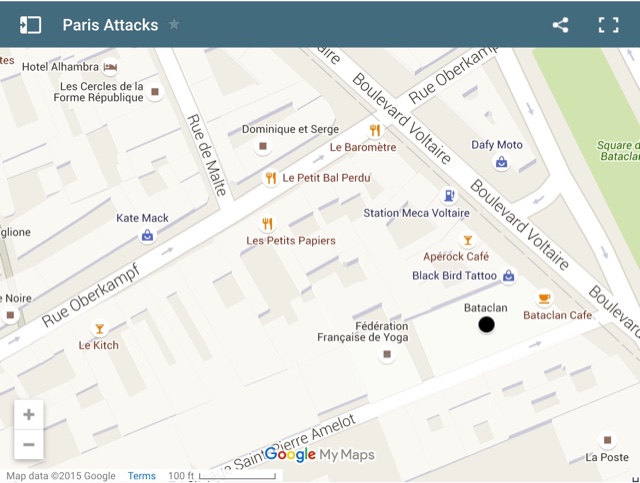 The Bataclan is a theatre located at 50 boulevard Voltaire in the 11th arrondissement of Paris.

Built in 1864 by the architect Charles Duval, its name refers to Ba-Ta-Clan, an operetta by Offenbach, but it is also a pun on the expression le tout bataclan(the whole caboodle), the oldest written use of which predates Offenbach in a journal entry of 11 Nov 1761 by Favart. The nearest Métro stations are Oberkampf on Line 5 and Line 9 and Filles du Calvaire on Line 8. 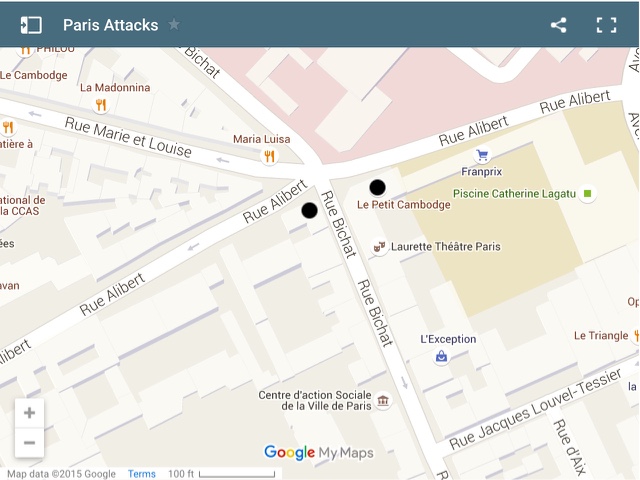 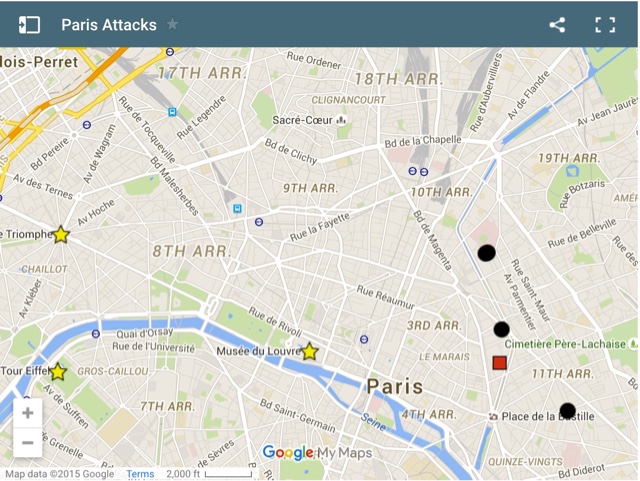 Some individuals escaping from the Bataclan mentioned they had to get back to their cars parked on the rue La Fayette. The Fayette factor? 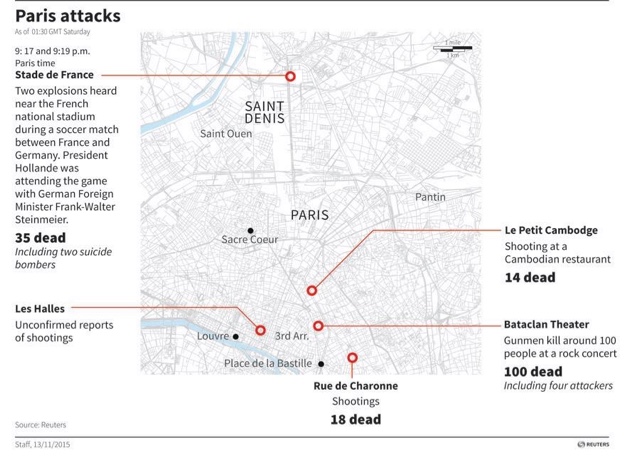 My Friday the 13th tweet, send out a few minutes before 10 AM Eastern USA, I now find haunting: “Woke to a red dawn….” 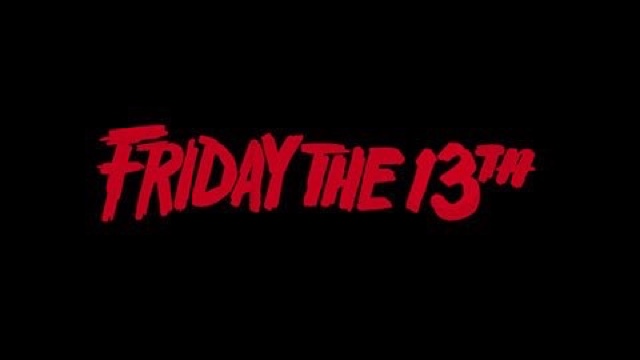