Something wicked this way came. I posted last night about “Wicker Man Deaths,” and minutes later, the above photograph was taken as the Dallas sniper shootings began. 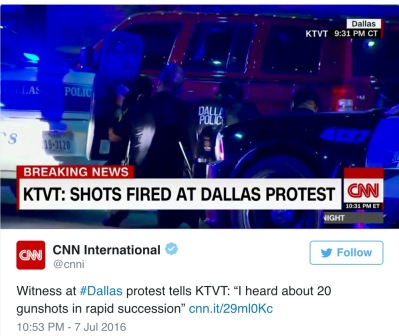 It has been a devastating night in Dallas. Five law enforcement officers have been killed due to sniper fire. Twelve officers were shot, thus leaving 7 wounded.

One deceased officer identified is Dallas Area Rapid Transit officer Brent Thompson, 43.
In rapidly issued but confusing reports, three suspects have been arrested or detained, one was in a standoff, and that one was killed by a bomb set off by the DPD.

The individual who was in the 45 minute El Centro College garage standoff with police was reported to have said, “The End is coming.”

The “deadliest day” for law enforcement “since 9/11,” says the media.
The “worst day” in Dallas since the JFK sniper assassination (which “coincidentally” occurred in the Masonic site, Dealey Plaza down the street from this mass sniper attack).
The protests and shootings appear to have taken place near Elm Street, two blocks from Dealey Plaza. 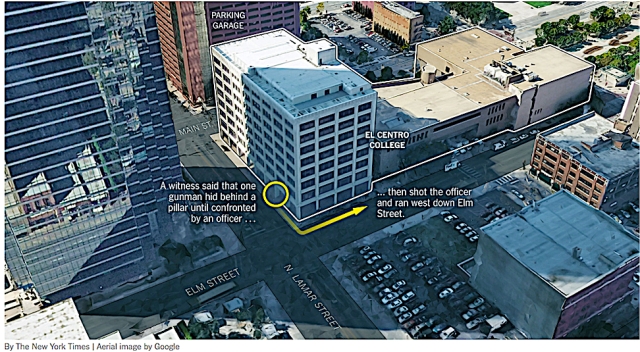 The police officers (DPD – Dallas Police Department – and DART – Dallas Area Rapid Transit) were protecting peaceful Black Lives protestors, when at the end of the protests, shots rang out.

Boing Boing, earlier in the evening, summarized what was happening in this partial posting:

Reports broke at roughly 10pm ET tonight that shots were fired at a Black Lives Matter demonstration in Dallas, where people gathered to protest the recent police killings of Alton Sterling and Philando Castile. Multiple police officers and peaceful protesters were shot from “elevated positions,” with series of controlled bursts, 6 shots at a time, audible on footage. Dallas police report that 2 snipers opened fire and shot 11 officers. Four officers are reported to have died from their injuries. At least one person who was not a police officer is said to have been injured.
Two sniper suspects have been apprehended, Dallas Police reported around 1AM ET. There may be more suspects.
The Dallas Police Chief says some of officers were shot in the back, and that the suspects “intended to injure and kill as many law officers as they could.” Police say the suspects threatened to place a bomb in downtown Dallas.

Much can be said of the possible copycat effect this may cause, but more details need to be gathered.

The shooter was identified as Micah Xavier Johnson. 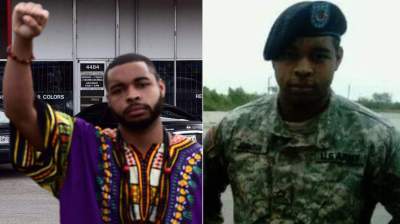 An Army veteran “upset about Black Lives Matter” and “recent police shootings” whoopened fire Thursday night in Dallas in an attack on police officers has been identified as Micah Xavier Johnson, the Los Angeles Times and CBS News report.
Five police officers were killed and seven were wounded, officials said. Two civilians were also wounded in the shootings. Johnson, 25, was killed when a police robot detonated a bomb near him following a standoff that lasted several hours, Police Chief David Brown said Friday at a press conference.

Micah Xavier Johnson, 25,…told police he was “not affiliated with any groups,” and he said he “did this alone,” the chief said.
Sources told the Los Angeles Times that Johnson has no ties to terror groups and no known criminal history. He has lived in the Dallas area and has family members living in Mesquite, Texas, east of Dallas, the newspaper reports, citing federal law enforcement sources.

Someone tweeted the following as the Dallas shootings were being reported:
The Lord tests the righteous, but his soul hates the wicked and the one who loves violence. ~ Psalm 11:5 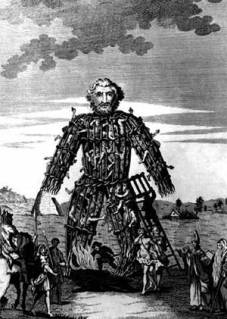 Posted by Loren Coleman at 5:49 AM