With voting set to get underway in less than 24 hours, we thought it appropriate to provide a recap of where the final polls stand nationally and in the key swing states across the country.  While it’s unclear what impact Comey’s latest announcement to clear Hillary, yet again, will have on the election results, here’s what the latest polls predict prior to factoring in the latest FBI news which, if anything, would provide a positive impact for Hillary.

The latest national polls are mixed with the ABC / Washington Post poll showing a 4-point lead for Hillary. 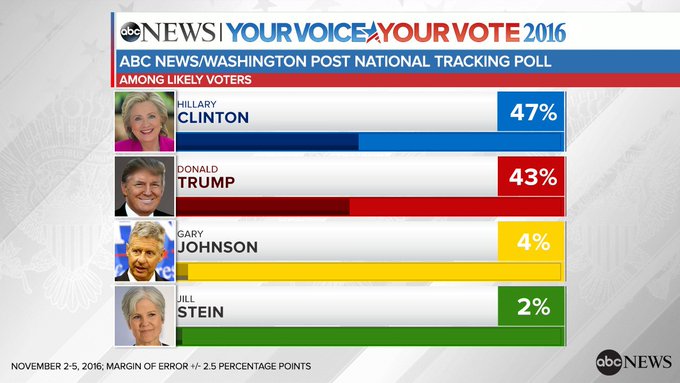 Bloomberg also shows a small 3-point edge for Hillary in a national contest.

That said, the Investor’s Business Daily / TIPP poll, which has been the most accurate over the past several election cycles, shows a 2-point national edge for Trump.

While the LA Times daily tracking poll shows a 5-point lead for Trump.

But, as we all know, while the national polls provide insight on general trends within the electorate, the 2016 presidential race will ultimately be determined by a couple of key swing states.  Here’s where they stand according to the Real Clear Politics averages:

Florida is effectively a dead heat with RCP showing a slight 1-point advantage for Clinton.

Trump has maintained a fairly consistent lead in Ohio in recent weeks with the last RCP average giving him a 3-point edge.

Meanwhile, Trump has experienced a surge in Nevada in recent weeks…

…and in North Carolina as well where he has just recently reclaimed a small lead over Hillary.

While many Republicans in recent elections have sought last-minute wins in Pennsylvania, Hillary looks to be maintaining a 2.5-point lead there.

Hillary is also holding on to a 3-point advantage in Colorado.

While interesting, given the many bizarre twists in this election cycle, we would not be at all surprised to see actual election results vary wildly from the polling data.  So stock up on your popcorn, tomorrow should be fun.