The diving competitions at the 2016 Summer Olympics in Rio de Janeirotook place from 7 to 20 August at Maria Lenk Aquatic Center in Barra da Tijuca.[1] It was one of four aquatic sports at the Games, along withswimming, water polo, and synchronised swimming.

On Tuesday August 9, the water of the diving well turned dark green, originally thought to be caused by the heat and lack of wind in the venue. However, at the time a CNN photographer took a picture, an adjacent pool in the same location was not green.[5] Olympic officials later confirmed that the change in color was due to 160 litres of hydrogen peroxide having been mistakenly added to the pool during cleaning. 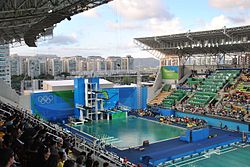 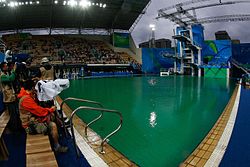 The water of the diving pool turned a green colour[7]

A nation could have no more than 16 divers qualify (up to eight males and eight females) and could enter up to two divers in individual events and one pair in synchronized events.[3]

For the individual diving events, qualifiers were:

For the synchronized events (pairs), qualifiers were:

Note: Qualifying spots went to the nation – they were not tied to the individual diver who achieved the place/finish at the qualifying event. However, an individual diver might only qualify one spot for their nation.

All times are Brasília Time (UTC-3)