The triathlon competitions at the 2016 Summer Olympics in Rio de Janeiro took place from 18 to 20 August 2016 at Fort Copacabana. Fifty-five athletes competed in each of the men’s and women’s events. 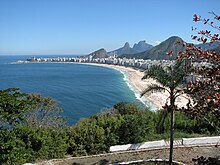 The qualification period spaned from 20 May 2014 to 15 May 2016. A total of 110 athletes (55 for each gender) vied for the coveted spots with a maximum of three sent to compete for the first eight National Olympic Committees (NOCs), while the other NOCs might have a maximum of two per event. To qualify for the Games, all athletes must earn a quota place through the Continental Qualification Events, achieve a top three finish through the World Qualification Event and be among the top 140 in the Olympic Qualification List, World Triathlon Series Ranking, and Points List.[3][4]

Thirty-nine athletes for each gender qualified through the ranking, next to the 5 continental champions and the top 3 in the International Qualifying Event, held in Rio de Janeiro on 1–2 August 2015. Host nation Brazil had reserved one quota per gender, while two more were allocated according to the Tripartite Commission Invitation. In the end, further five places were distributed to the NOCs without any quota through the ITU Points List.[3]

All times are Time in Brazil (UTC-3). All event times are subject to change.

Main article: List of triathletes at the 2016 Summer Olympics