Juaquin James Malphurs (born May 31, 1986), better known by his stage name Waka Flocka Flame or simply Waka Flocka, is an American rapper from Atlanta, Georgia. Signing to 1017 Brick Squad and Warner Bros. Records in 2009, he became a mainstream artist with the release of his singles “O Let’s Do It“, “Hard in da Paint” and “No Hands“, the latter of which peaked at number 13 on the US Billboard Hot 100. His debut studio album Flockaveli, was later released in 2010. His second studio album Triple F Life: Friends, Fans & Family was released on June 8, 2012 and was preceded by the lead single “Round of Applause“.

Juaquin Malphurs was born in South Jamaica, Queens, New York, in 1986. His family eventually settled in Riverdale, Georgia, in the Atlanta area.[2] His mother, Debra Antney, is rapper Gucci Mane‘s former manager and CEO of So Icey/Mizay Entertainment.[3] The name “Waka” was given to him by his cousin, after the Muppets character Fozzie Bear‘s catch phrase, “Waka Waka”. The name “Flocka Flame” was given to him by rapper Gucci Mane.[4] Waka Flocka said that he has known Gucci Mane since he was 19.[5] 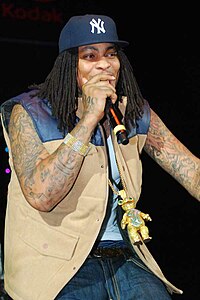 Waka Flocka came to fame with his breakthrough single “O Let’s Do It” in 2009,[6] which peaked at number 62 on the US Billboard Hot 100.[7]Waka Flocka is a member of 1017 Brick Squad with Gucci Mane, OJ Da Juiceman, Frenchie, and Wooh Da Kid.[8] On January 19, 2010, Malphurs was shot and robbed at a car wash in Atlanta. The bullet went through his right arm.[9][10] His debut album, Flockaveli was released on October 1, 2010.[11] The album debuted at number six on the US Billboard 200.[12] The album is titled after the Italian political theoristMachiavelli,[13] and inspired by Tupac Shakur, whose final stage name and pseudonym before his death was Makaveli.[14] He was named the eighth hottest MC of 2010 by MTV.[15]

Gucci Mane fired Debra Antney as his manager. There was initially no animosity between the two rappers due to this event. In an MTV interview, both he and Waka Flocka affirmed that their relationship was, at the time, in good standing even though they no longer spoke to one another.[16] In early September, Gucci Mane was seen at Flocka’s Flockaveli listening party supporting the artist.[17]

In 2011, Waka Flocka posed for a nude but unrevealing picture for the organization PETA, to boycott killing animals and wearing fur. The picture says “Ink not Mink”.[18] Waka Flocka released several mixtapes in 2011, including Salute Me or Shoot Me 3, Benjamin Flocka and his last Twin Towers 2 (No Fly Zone) with fellow rapper Slim Dunkin.[19][20][21] On August 9, 2011, his collaborative album with Gucci Mane, titledFerrari Boyz, was released.[22] The first single was “She Be Puttin On”, featuring the now deceased Slim Dunkin, who was shot at an Atlanta recording studio while shooting a music video.[23]

“Round of Applause” featuring Canadian rapper Drake, was released on October 14, 2011[24] as the first single from his second studio album, Triple F Life: Friends, Fans & Family. It was produced by frequent collaborator, Lex Luger. The album itself was released on June 8, 2012.[25]

On January 22, 2013, Waka Flocka announced that he has completed his third studio album, titled Flockaveli 2. He revealed the album will feature guest appearances fromTimbaland and Wyclef Jean. Also the album will be mainly produced by longtime producers of 808 Mafia, Lex Luger, Southside, TM88 and more.[26] On February 5, 2013, Waka Flocka released his mixtape DuFlocka Rant 2 with guest appearances from Gucci Mane, Lil Wayne, French Montana, Ace Hood and Young Scooter, among others.[27] On May 9, 2013, he released a sequel, titled DuFlocka Rant: Halftime Show which features fellow Southern rapper T.I..[28] Flockaveli 2 was then rescheduled for release in early 2014,[29]and on October 4, 2013, Flocka released another mixtape From Roaches to Rollies.[30] On October 31, 2013, Waka Flocka confirmed that Ne-Yo and Drake would be featured onFlockaveli 2.[31]

On March 2, 2015 Waka Flocka released a collaboration mixtape with DJ Whoo Kid entitled The Turn Up Godz Tour, with guest appearances from Future, Howard Stern,Machine Gun Kelly, Offset, Cash Out, Bobby V, Gucci Mane, Tony Yayo & Watch The Duck.[39][40] On April 1, 2015 Waka Flocka released the mixtape Salute Me Or Shoot Me 5, with guest appearances from Future, Yo Gotti and Juvenile.[41][42][43]

December 30, 2013 it was reported that Waka Flocka’s younger brother and fellow artist KayO Redd was found dead in his Henry County, Georgia home. On December 31, 2013 his death was confirmed a suicide.[46] [47] [48] [49] On January 24, 2014 during an interview Waka Flocka spoke on his brother’s passing, stating: “After that situation I detoxed for like seven days. I changed my diet. I became 85% vegan. I just felt like I had to cleanse myself…I’ve been through that before, so to me that’s will power because if I sit there and mope, a lot of things could go bad. That boy had a lot of stress on him. It’s a lot of things that go on behind doors that people don’t know about…like it’s a lot of stress that come with this game. The strong survive. The family is good, though. Life goes on. That’s the motto for me, life goes on. If my eyes ain’t closed and I’m not breathing, I’m not hurting.”[50][51]

On October 10, 2014 Malphurs was arrested at Hartsfield-Jackson Atlanta International Airport when a security scan turned up a loaded handgun in his luggage. Malphurs was released two hours later.[59][60]

On March 15, 2013, Gucci Mane announced that frequent collaborator and close friend Waka Flocka Flame was “dropped” from 1017 Brick Squad Records. The two rappers proceeded to throw insults back and forth on Twitter.[61] Though it was reported that Gucci’s Twitter account was hacked, Waka stated, “Dont let da media fool u. This shit real Shawty.”[62] On March 27, 2013, during an MTV Jams interview with Sway Calloway, Waka explained that he would never do music nor business with Gucci ever again. Neither of the rappers have explained where the controversy originated from. Waka has stated, “I guess we both be at the finish line we just going our own routes. That’s all I can say. What’s the reason? Sometimes it’s none of your fuckin’ business what’s the reason. Just understand two men went they own ways but it’s no problem.”[63] In October 2013, Waka Flocka released a diss track towards Gucci Mane titled “Ice Cream”.[64]

On November 19, 2013, it was revealed Gucci Mane had filed a lawsuit against Waka Flocka Flame, Waka’s mother Debra Antney, OJ Da Juiceman, rapper Khia Stone and producer Zaytoven. The lawsuit accuses the parties of fraud, racketeering, and breach of contract. According to Gucci Mane, Waka’s mother Antney took control of his 1017 Brick Squad Records, LLC., without permission, and used it to create three separate offshoot labels. Gucci also accused the parties in the lawsuit of withholding royalties and inflating the cost of label expenditures.[65] In his lawsuit, Gucci Mane also says that Antney took more than the typical 20 percent management fee. Gucci Mane also alleges that Antney’s actions led to his having money and tax problems.[66]

Waka Flocka Flame would post a tweet on September 20, 2014 to his verified Twitter account that included an old picture of himself and Gucci Mane with the caption “… #NoBeef “, confirming that the two had buried the hatchet.[67]