The Pirate Party of Canada (French: Parti Pirate du Canada, abbreviated as the PPCA), is a minor party in federal Canadian politics. The party was registered with Elections Canada in 2010, the PPCA is modelled on the Swedish Pirate Party and advocatesintellectual property reform, privacy protection, network neutrality and greater government openness.[2] No member of the party has been elected to Parliament.[3]

The Pirate Party drew its inspiration from the Piratpartiet, the Swedish Pirate Party. In 2001, the copyright industry established theAntipiratbyrån — The Anti-Piracy Bureau. In 2003, to combat this legislation, a group of artists, musicians, and cultural workers founded a think-tank called the Piratbyrån — the Piracy Bureau. In selecting that name, the Bureau was signalling that they were the progressive, while the antis were the regressive. In 2005, when copyright laws were harshened again in Sweden, the Bureau established itself as a political party becoming the Pirate Party.[5] Because of past successes of the Bureau, the name immediately conveyed all the political ideas the party stood for. Under that banner, the Pirate Party came 5th in the 2009 European Parliament elections with 7.13% of the vote and 1 MEP, later increasing to 2 after ratification of the Lisbon Treaty, Christian Engström became the first MEP for the party, and Amelia Andersdotter took the second seat on December 1, 2009.

The Canadian Pirate Party was ideologically founded out of that movement, retaining much of the political thought of its parent party.

“…we keep our funny name but use it to get the attention to spread to our very important causes.” -Travis McCrea, former leader[6] 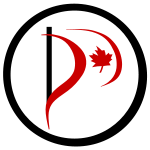 Former logo of the PPCA 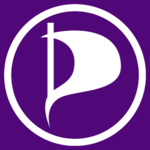 In June 2009, the PPCA was founded by a handful of Canadian supporters active on the web forums of the Pirate Parties Internationalcollective.[7][8][9] The party established its own forums and removed membership fees, as part of a campaign to gain the 250 members necessary for registration,[10] gaining 1,000 members by October 2009.[11]

In October 2009, the party selected university student Jake Daynes as its interim leader and established an interim council.[12] On April 12, 2010, the party was granted official status by Canada’s chief electoral officer, Marc Mayrand.[13][14] On August 19, 2010, the party held its first leadership elections.[15] On September 1, 2010, the party’s first Federal Council was elected, with Mikkel Paulson as party leader.[16][17]

Following the 2011 election the party examined issues that had arose with its constitution and began taking steps to reform it. Issues included a hard-to-reach quorum for General Meetings and the difficulties of the Federal Council members running for office while also handling party paperwork and administration. On December 19 the party adopted the new constitution and held elections for the new Executive Board and Political Council.[20]

In June 2012, the party began the process of crowdsourcing its 2015 election platform and opened sections of its forums to guests.[21]

In July 2012, the party allegedly failed to produce its financial report for Elections Canada,[22] citing a changeover of official agents for the party. However, internal party documents demonstrate that the party’s membership have been advocating for a public release of the party’s financial information since the 2011 federal election.[citation needed] Despite these claims, Elections Canada has all of the party’s ‘Statements of Assets and Liabilities and Statements of Revenues and Expenses’ from 2011 until the present.[23]

On September 27, 2009, the party launched a BitTorrent tracker, named the “Canadian Pirate Tracker” or “CaPT”, with the aim of promoting its position on works being released online[24]

Pirate Party Radio was a weekly audio show from 2009-2011 produced by the Canadian RantMedia and host James O’Brien.[25] It was recognised by the Pirate Party of Canada,[26] United States Pirate Party[27] and Pirate Party UK.[28] On May 5, 2011 the weekly broadcasts stopped.

In 2011, in response to lawful access legislation that was being put forward in Parliament, the party announced it would launch a VPN service to help guard Canadians’ online privacy.[29]

In early 2012, also in response to Bill C-30, several members of the party created a new Linux distro titled Pirate Linux. It is installable as a package on an existing Linux system or as its own distribution based on Ubuntu. It includes many privacy enhancements, including utilizing Tor with browsers preconfigured for its use.[30]

Like the Swedish Pirate Party, the PPCA platform is focused on intellectual property reform, privacy, net neutrality and open government.[2] The party has also called for net neutrality in Canada, and suggested that medical patentsare preventing innovations that could save lives.[32] Candidates have also suggested that making government records available online may encourage transparency, and allow citizens to more directly scrutinize and participate in the process.[33]

Like their Pirate counterparts worldwide, the PPCA is bloc-neutral on other issues, noting that issues outside the party’s realm are left to the individual candidate to represent their own constituents’ desires.[33][34][35]

The PPCA has been heralded by OpenMedia.ca for its “digital policy issues”.[36]

On March 1, 2015, the party provided a press release in opposition to Bill C-51, calling for debate, criticism and discussion.[38] Among their criticisms, they believe that the bill is redundant as there are existent laws dealing with terrorists, and this proposal opens the potential for governmental abuse as it “will also allow the government to arrest and incarcerate any citizen based on subjective evidence, then have that evidence destroyed”[39] 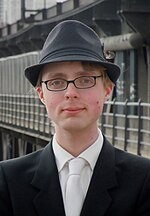 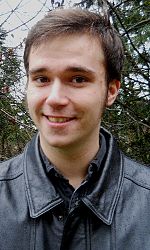 The party is run by three organs of party governance: the Executive Board, the Political Council, and the General Meeting. The Executive Board consists of the president, vice-president, secretary, leader, deputy leader, and chairs of standing committees of the party.[40] The Political Council consists of the leader, deputy leader and other council members elected by approval voting.[41] The General Meeting is open to all members and meets monthly.[42] While the Executive Board and Political Council can act independently in most matters, the General Meeting has veto power over their decisions and may pass their own motions.[43][44] If a member of the party became elected, that member would become the leader of the party; if multiple members of the party become MPs, the MP who got elected with the highest percentage would become the party leader.[45] This party leader would still be answerable to the party as a whole, and could be replaced by the council.[45]

The first federal election contested by the party was the November 2010 by-election in Winnipeg North, finishing ahead of the Communist and Christian Heritage parties, but behind the Green Party.[19][46]

Jeff Coleman, a 25-year-old small business owner, was the first Pirate Party of Canada candidate to run for federal election.[47][48]

After Bob Rae resigned as the member for Toronto Centre riding, a by-election was held on November 25, 2013. On August 2, 2013, Travis McCrea announced that he was running in the riding.[51] On October 11, 2013, McCrea stepped down from the leadership of the Pirate Party of Canada, and withdrew his name from the by-election, citing depression.[52][53][54][55]

The 42nd federal election will be held October 19, 2015. The PPCA is running five candidates; two each in Alberta and British Columbia, and one in Ontario.[56] James Wilson, the current leader of the party, planned to run in New Brunswick’s Fundy Royal riding,[4] but ultimately did not.[57]

On January 1, 2012, twelve[62] IP addresses assigned to the Canadian House of Commons were caught pirating copyrighted films, music, e-books and software.[63] In the same leak, similar activities were linked to the U.S. House of Representatives and the French President’s residence, the Elysees Palace.[64] The discovery was attributed to the PPCA.[62][65]

Green Party of Canada leader Elizabeth May noted that the PPCA seemed redundant, as the two parties shared the majority of their platforms on copyright reform, medical patents and intellectual property;[66] but the PPCA responded that “even if the Green Party had the same stance as us, […] they were not talking about these issues in the last election; no party was”.[67]

David Shipley, an analyst at the University of New Brunswick’s Information Technology Services department, has criticized the party for running mostly on Internet-related issues, which may not be enough to garner votes. He is quoted as saying: “How much people decide where they’re going to place their vote based on their entertainment preferences, I’m not sure.”[4]

Jon Pammett, professor of political science at Carleton University, sees issues with small single-issue parties, like the PPCA. In his opinion the Pirate Party has a larger set of issues than most as they have “picked a set of quite complicated and technical issues, however, and may have some difficulty using the limited attention they get in public campaign events to adequately explain them.”[68]