With snowflakes everywhere across America seemingly content to burn the Stars & Stripes to protest democracy’s decision to elect what they have been told is a racist, homophobic, anti-semitic, sexist, tax-fraud as president…

… President-elect Donald Trump has put his foot down in this seemingly most unpatriotic of endeavors:

Nobody should be allowed to burn the American flag – if they do, there must be consequences – perhaps loss of citizenship or year in jail!

Of course, there is the small issue of changing the Constitution as flag burning remains protected speech by the First Amendment.

The catalyst for Trump’s 7 a.m. tweet is unclear. Fox News reported earlier this month that Hampshire College in Massachusetts would stop flying all flags on campus after an American flag was burned following Trump’s win.

“We hope this will enable us to instead focus our efforts on addressing racist, misogynistic, Islamophobic, anti-immigrant, anti-Semitic and anti-LGBTQ rhetoric and behaviors,” Hampshire’s president, Jonathan Lash, said in a statement at the time.

Rep. Sean Duffy (R-Wis.) pushed back on Trump’s proposal during an early morning interview. “I don’t think we want to make this a legal issue,” Duffy told CNN on Tuesday.

And before the liberal media gets hold of this tweet and claims Trump’s fascist tyranny is peaking through against constitutionally protected rights to do whatever a citizen wants, don’t forget that none other than the Hillary Clinton herself sponsored exactly this punishment in The Flag Protection Act of 2005 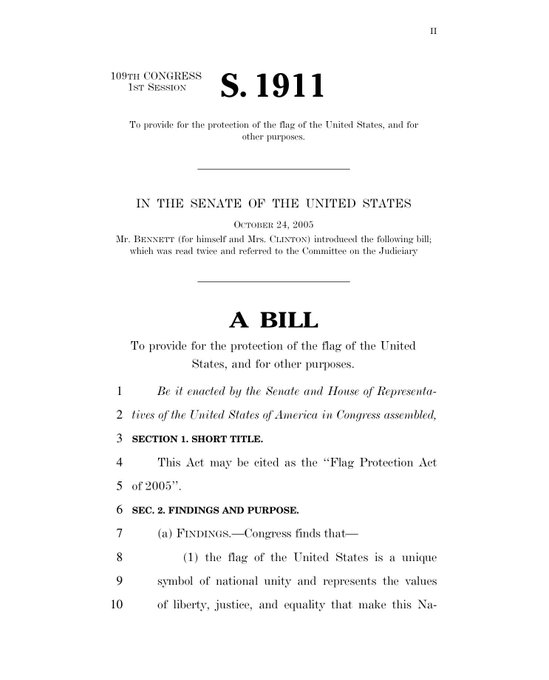 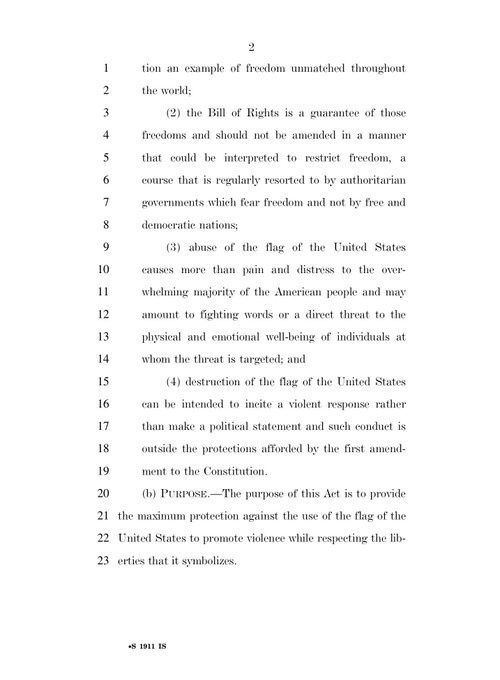 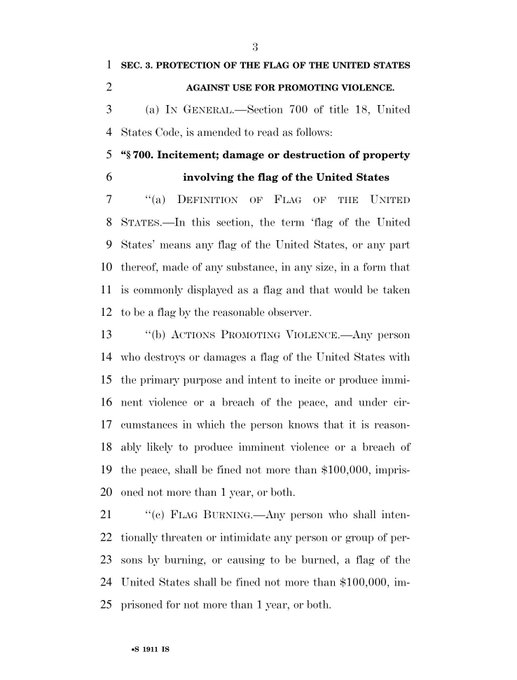 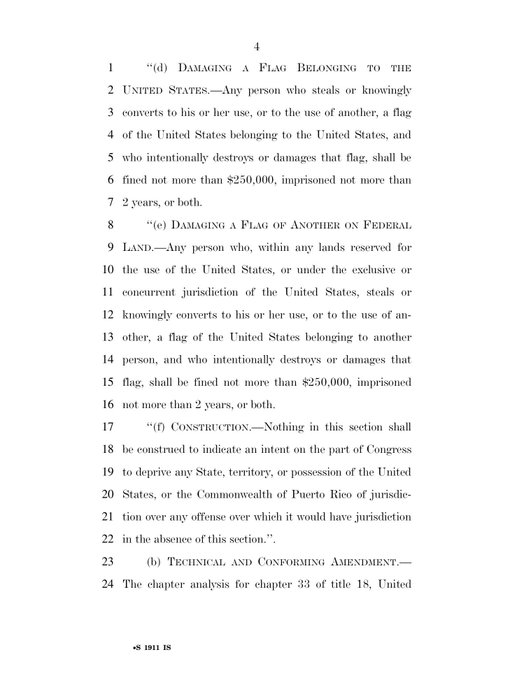 In 2005 a bill was introduced that would outlaw burning the American flag.

That bill was introed by: @HillaryClinton & Sen Bennett (R-UT)

The Flag Protection Act of 2005 was a proposed United States federal law introduced by Senators Hillary Clinton and Robert Bennett. The law would have outlawed flag burning, and called for a punishment of one year in jail and a fine of $100,000. According to the nonpartisan Congressional Research Service, the act was summarized as such:

Amends the federal criminal code to revise provisions regarding desecration of the flag to prohibit: (1) destroying or damaging a U.S. flag with the primary purpose and intent to incite or produce imminent violence or a breach of the peace; or (2) stealing or knowingly converting the use of a U.S. flag either belonging to the United States or on lands reserved for the United States and intentionally destroying or damaging that flag.

Early in his presidential campaign, Trump said that he supported revoking the citizenship of babies born to undocumented immigrants, but this appears to be the first time since then that he’s proposed revoking citizenship as a punishment.

In a choice that confirms Trump’s intentions to dismantle Obamacare, Reuters reports that President-elect Donald Trump will shortly announce he has chosen vociferous Obamacare critic Tom Price (R. Ga), an orthopedic surgeon from Georgia, as his Health and Human Services secretary to help him overhaul the U.S. healthcare system.

“Chairman Price, a renowned physician, has earned a reputation for being a tireless problem solver and the go-to expert on healthcare policy, making him the ideal choice to serve in this capacity,” Trump said in a statement. “He is exceptionally qualified to shepherd our commitment to repeal and replace Obamacare and bring affordable and accessible healthcare to every American. I am proud to nominate him as Secretary of Health and Human Services.”

Price, who currently leads the House Budget Committee, has spent more than a decade in Congress and has become a close ally of GOP leadership. As a member of the House GOP Doctor’s Caucus, Price helped shape the healthcare plan that House Speaker Paul Ryan now pitches as his alternative to ObamaCare. Trump also slected consultant Seema Verma to lead the Centers for Medicare and Medicaid Services (CMS), a powerful agency that oversees government health programs and insurance standards.

Price is a vocal critic of ObamaCare and he brings a deep background in health legislation. In 2014 as the law faced a major challenge at the Supreme Court, Price authored his own plan to replace the law.

“I am humbled by the incredible challenges that lay ahead and enthusiastic for the opportunity to be a part of solving them on behalf of the American people,” Price said in the Tuesday morning statement. “There is much work to be done to ensure we have a healthcare system that works for patients, families, and doctors; that leads the world in the cure and prevention of illness; and that is based on sensible rules to protect the well-being of the country while embracing its innovative spirit.”

Trump is expected to cast Price and Verma as a “dream team” to help him once he takes office on Jan. 20 with his campaign pledge to repeal President Barack Obama’s signature health law, the Affordable Care Act that is better known as Obamacare. Trump has said he will replace Obamacare with a plan to give states more control over the Medicaid health plan for the poor and allow insurers to sell plans nationally. Both positions require Senate confirmation and the Trump administration will need to have agreement from Congress to repeal and replace the health law.

Price, an early Trump supporter from the U.S. House of Representatives, has long championed a plan of tax credits, expanded health savings accounts, and lawsuit reforms to replace Obamacare. Verma worked with Vice President-Elect Mike Pence, the governor of Indiana, on a compromise to expand Medicaid coverage for the state’s poor with federal funding. The Indiana program requires beneficiaries to make monthly contributions to health savings accounts.

Price also supports an idea backed by Speaker Paul Ryan (R-Wis.) to shift Medicare to rely more on private insurance. The government would provide financial assistance to help people afford private plans, or the current government-run option.  Republicans say this would save the government money, while Democrats warn it would “end Medicare as we know it” and erode the guarantee of care for seniors.

Price campaigned with Trump because he promised to overhaul Obamacare. However, Trump’s position on the health insurance program appeared to soften after he met Obama following the hard-fought Nov. 8 election.

Obama has acknowledged the law could use improvements but has credited Obamacare with cutting the number of uninsured Americans from 49 million in 2010 to 29 million in 2015. Much of that drop is due to the law’s provision allowing states to expand Medicaid.

Trump said he would consider keeping provisions in the law that let parents keep adult children up to age 26 on insurance policies and bar insurers from denying coverage to people with pre-existing conditions.

According to Reuters, Price and Verma are two of about 70 people who Trump has met so far as he looks to shape his White House and Cabinet team.

In addition to Price, Trump is expected to reveal an additional Cabinet pick on Tuesday, but is not expected to announce his choices for the three biggest positions – state, defense and treasury – as he continues to consider his options.

After seeing retired general David Petraeus on Monday – a potential candidate for the State Department or the Pentagon – Trump is expected to meet U.S. Senator Bob Corker of Tennessee, the chairman of the Senate Foreign Relations Committee on Tuesday, and later have dinner with Mitt Romney. Romney, the 2012 Republican presidential nominee, and Corker are in the running for secretary of state, along with former New York Mayor Rudy Giuliani.