“Ben Carson and Donald Trump — you are no George W. Bush. And neither are you, Bobby Jindal, Ted Cruz, Mike Huckabee and Scott Walker,” whines David Haynes of the Milwaukee Journal Sentinel.

JS online  Six days after the Sept. 11 terrorist attacks, which were perpetrated by Muslim extremists, President George W. Bush went to the Islamic Center of Washington, D.C., to give a speech (see video below). Concern was rising among Muslims about reprisal attacks, and Bush tried to tamp down the raw emotions as the ruins of the Twin Towers lay smoldering at Ground Zero.

“The face of terror is not the true faith of Islam,” the president said. “That’s not what Islam is all about. Islam is peace. These terrorists don’t represent peace. They represent evil and war.” Bush led Americans to higher ground — it was one of his finest moments as president. But some Republican candidates now insist on leading us into the muck.

Carson told Chuck Todd on “Meet the Press” last week that he couldn’t support putting a Muslim “in charge of this nation” even though the Constitution is blind on religion.

Trump smilingly played along with a supporter at a New Hampshire town hall meeting who told the real estate baron that “we have a problem in this country. It’s called Muslims.” The man also claimed President Barack Obama is Muslim and parroted a common meme among the right-wing fringe about supposed terrorist “training camps” in the U.S.  “We need this question,” Trump said with a chuckle.

Bobby Jindal, the Louisiana governor, has warned that Muslims are trying to establish Sharia law in “no-go zones” in western nations, a widely ridiculed notion that even Fox News distanced itself from.

Mike Huckabee has claimed Obama coddles Muslims. “The one group of people that can know they have his undying, unfailing support would be the Muslim community,” the former Arkansas governor said.

And Scott Walker, who quit the race this week amid a cash crunch, declined earlier this year to say whether he thought Obama was Christian — “I’ve never asked him that,” he said.

Republican Sen. Ted Cruz of Texas gave a similar answer last week, a politically cute wink-and-a-nod that leaves open the possibility that people who believe such rubbish will think you believe it, too.

Marginalizing Islam in these ways is crass and cynical. It is pandering to a slice of Republican voters who are worried about Islamic extremism but aren’t making a clear distinction between terrorists and the vast majority of American Muslims who love their country and abhor violence committed in the name of their faith.

Republicans or those who lean Republican have far more negative views of Muslims than do Democrats, according to a survey conducted last year by the Pew Research Center. Republicans rated Muslims about the same as atheists and far lower than any other religious group.

In a Gallup poll this month, 54% of those identifying as Republicans said they wouldn’t vote for a Muslim for president. A PPP poll from August found that 54% of Republicans believe Obama is a Muslim. No surprise: The Washington Post’s “Monkey Cage” blog found a strong connection between Trump’s support and a belief that Obama is lying about being a Christian.

The Bush family is an American family that is prominent in politics and business. Along with many members who have been successful bankers and businessmen, across generations the family includes two U.S. Senators, one Supreme Court Justice, two Governors and two Presidents (one of the two presidents also served as Vice President). George Herbert Walker Bushand Barbara Pierce Bush have been married for 70 years, holding the record for the longest-married presidential couple.Peter Schweizer, author of a biography of the family, has described the Bushes as “the most successful political dynasty in American history”.[1] According to some online sources,[2] the Bush family is of primarily English and German descent. 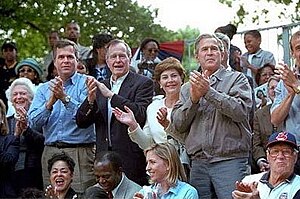 Connections to other prominent families[edit]

George Herbert “Bert” Walker (1875–1953) was a wealthy American banker and businessman. His daughter Dorothy marriedPrescott Bush, making him the grandfather of the 41st President George H. W. Bush and the great-grandfather of the 43rd President George W. Bush. He is also the namesake of the Walker Cup, a men’s amateur golf trophy contested in odd-numbered years between a U.S. team and a combined Great Britain and Ireland side.

The Livingston family, a prominent family which migrated from Scotland to New York (then New Netherlands) in the 17th century, whose descendants include signers of the United States Declaration of Independence (Philip Livingston) and theUnited States Constitution (William Livingston), Lords of Livingston Manor and Clermont Manor, located along the Hudson River in 18th-century eastern New York, First Lady of the United States Eleanor Roosevelt, Congressman Bob Livingston ofLouisiana, much of the wealthy Astor family, New York Governor Hamilton Fish, and actors Montgomery Clift, and Jane Wyatt. Flora Sheldon, wife of Samuel P. Bush, was a Livingston.

The Schuyler family, a prominent family which migrated from the Netherlands to New York (then New Netherlands) in the 17th century around Albany, NY. Descendants include much of the Livingston family, General Philip Schuyler during the American Revolution, Cornplanter, a Seneca Chief who fought on the side of the British during the American Revolution, David Mathews, Mayor of New York City during British occupation, Major General Schuyler Hamilton, a grandson of Alexander Hamilton, and members of the political Kean family which includes Thomas Kean and Thomas Kean Jr..

My Obama-mania grows with revelations from the New England Geneological Society that Obama is related to atleast 6 different Presidents and even Brad Pitt! The NEGS released family trees of all the presidential candidates. Their major findings are as follows:

Clinton: Camilla Parker-Bowles, Madonna, Angelina Jolie among the notable ones.

Obama leads again in this count of “super”(dead) delegates!!!

Here is how Obama is related to Bush. Notice the similarity in their coats…