Here is the latest:

The drama on the Berlin Christmas market is a “terrible terror attack”. “Innocent civilians were murdered on the street when they were just about to celebrate the Christmas holidays,” Trump wrote in a message.

“The Islamic state and other Islamic terrorists regularly slaughter Christians in their communities,” Trump continues.

These
terrorists, their regional and world-wide networks would have to be
eradicated: “An order which we will carry out jointly with all partners
who are liberty-loving.”

A truck plowed into a crowd at a busy Christmas market in western Berlin leaving at least nine dead according to Berlin police, and over 50 people injured. The driver of the truck has been arrested and his co-driver is said to have died during the crash.

Local media, citing police at the scene, said first indications pointed to an attack on the market, situated in front of the Kaiser Wilhelm Memorial Church, a popular site for tourists. A police spokesperson told German media that they are treating the truck incident in Berlin as a terrorist attack.

“I heard a big noise and then I moved on the Christmas market and saw much chaos…many injured people,” Jan Hollitzer, deputy editor in chief of Berliner Morgenpost, told CNN. “It was really traumatic.”

The vehicle “drove sideways” onto the pavement at Breitscheidplatz, a major public square, reported Polizei Berlin.

Police cars and ambulances converged quickly on the scene as a huge security operation unfolded. 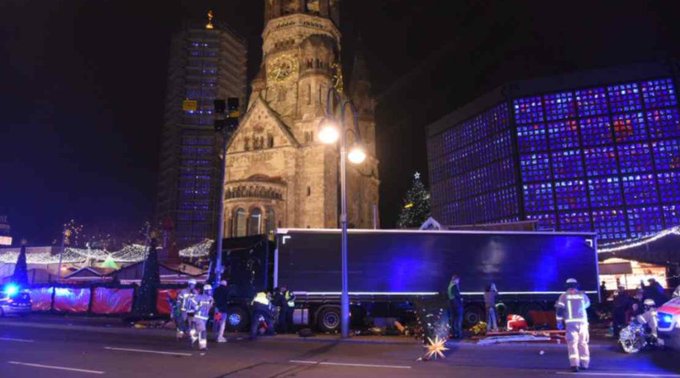 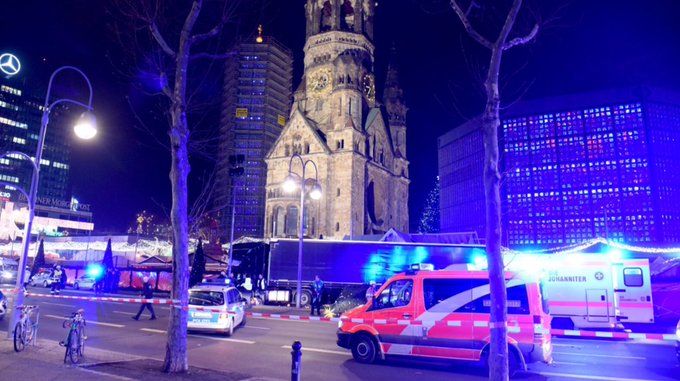 Two people were in the truck as it smashed into the Christmas market, a police spokesperson told Berlin Morgenpost. German newspaper Die Welt is reporting that the driver of the truck, who is currently in custody, was from Pakistan and entered Germany on February 16, 2016.  The passenger, a polish national, was detained at the scene but later died, the official said.

German media reports the driver was a Pakistani known to authorities.http://www.foxnews.com/world/2016/12/19/at-least-9-dead-dozens-injured-after-truck-plows-into-berlin-christmas-market-in-apparent-terror-attack.html …

A truck rammed into a crowded Christmas market in Berlin Monday night, killing at least 12 people and injured 48 others in what witnesses described as a deliberate attack.

Meanwhile German police has called on Berliners to “stay at home” after the deadly truck attack.

Television pictures from Berlin showed the truck standing amid debris by small wooden stalls that make up the “Christkindlmarkt” of which there are several in Berlin at this time of year. Police cars and ambulances converged on the scene.

Reuters reports that the German Interior minister to brief German Chancellor Angela Merkel and Berlin’s mayor about the Christmas market incident, according to Reuters.

Later in the day, US National Security Council spokesperson Ned Price condemned “what appears to have been a terrorist attack” on the Berlin Christmas market.

“We send our thoughts and prayers to the families and loved ones of those killed, just as we wish a speedy recovery to all of those wounded. We also extend our heartfelt condolences to the people and Government of Germany.” 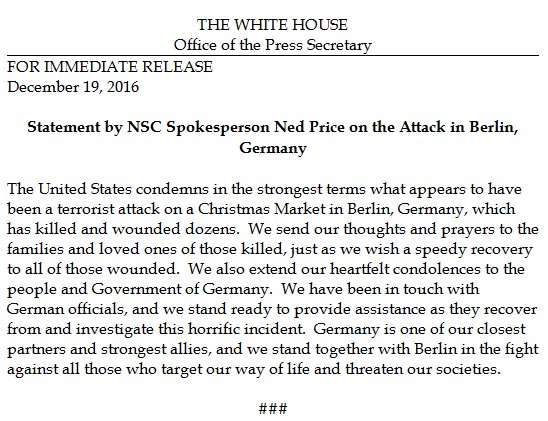 An eye witness, British tourist Emma Rushton, was speaking to CNN from her hotel room in Berlin. She said:

We were enjoying the Christmas lights when we heard a loud bang. We were sitting down, ready to get up. We saw to our left Christmas lights torn down and we saw the top of an articulated lorry crashing through the stalls and through people.

The lorry was driving fast, and it showed few signs that it was slowing down.  We wanted to get out as soon as possible, we wanted to get to a safe place.

She said she considered stopping to help the wounded, but decided it was too dangerous to remain in the area, and instead returned to her hotel.

If it did not feel like an accident it is perhaps because it is now being considered as the latest act of terrorism.

What is notable about this attack, and what may led to even more populist anger, is that as we reported last night, on November 21, the state department warned Americans travelling to Europe to be aware of possible terrorist attacks on Christmas markets

Credible information indicates the Islamic State of Iraq and the Levant (ISIL or Da’esh), al-Qa’ida, and their affiliates continue to plan terrorist attacks in Europe, with a focus on the upcoming holiday season and associated events.

U.S. citizens should also be alert to the possibility that extremist sympathizers or self-radicalized extremists may conduct attacks during this period with little or no warning. Terrorists may employ a wide variety of tactics, using both conventional and non-conventional weapons and targeting both official and private interests.

We are confident Merkel will be asked why she didn’t give out a similar warning to her own citizens.

The Police have said that the first indications from the ongoing investigation suggest the truck crash was an attack on the Christmas market.

Truck ploughs through Christmas market in Berlin. At least one dead, many injured. First video from @morgenpost reporter. pic.twitter.com/4QXvLpPsIt 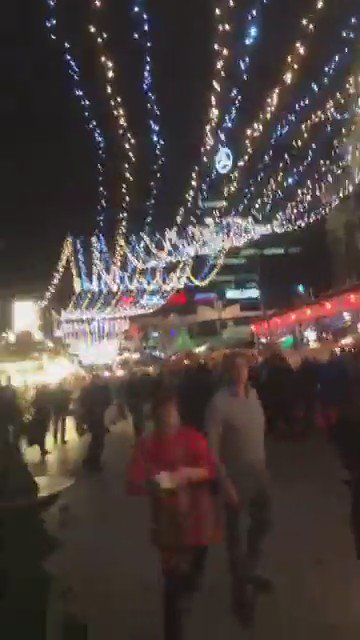 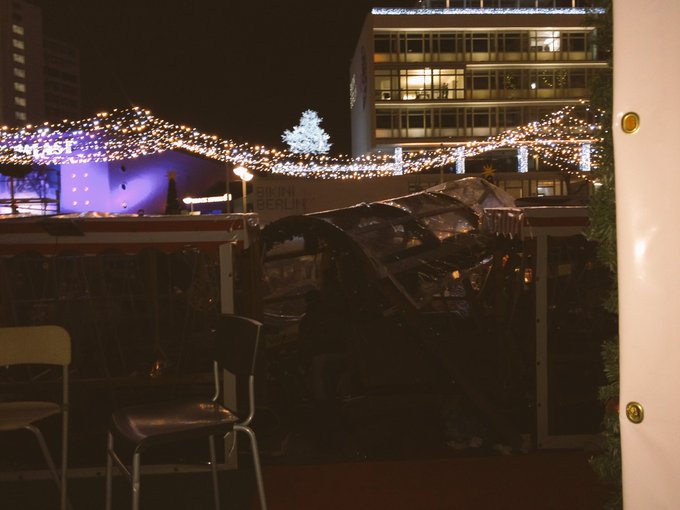 Lorry just ploughed through Christmas market in #berlin. There is no road nearby. People crushed. I am safe. I am safe 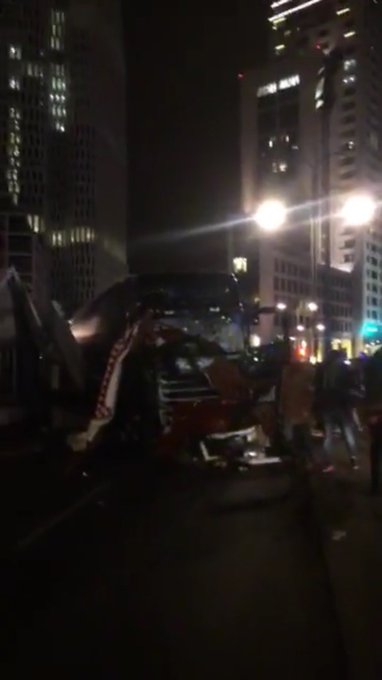 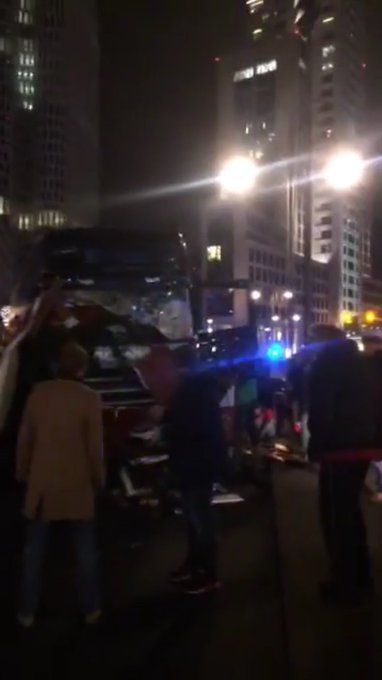 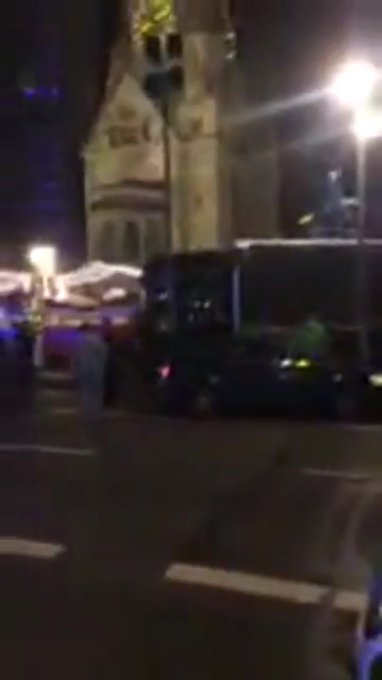 Police said that “numerous” people had been injured, but there is presently no information on potential fatalities.

Truck drives into a crowded Christmas Market in #Germany‘s #Berlin.
Many people injured. Many unconscious on the ground. Reports of a shot.

When the government in power resorts to censorship of an opposing political party, it should be stripped of the words ‘Christian’ and ‘Democratic’ from its name. But this is what happens when a Muslim-sympathizing Jew like Mark Zuckerberg of Facebook makes a deal with the devil – Angela Merkel.

Let’s hope this will be one of thousands of voices that publicly lay the blame directly at the feet of Angela Merkel for her illegal opening of the borders to hundreds of thousands of dangerous and parasitic Muslim invaders who want nothing more than to rape, plunder and destroy the culture and values of Germany…in their quest to turn Germany into the same kind of Islamic hellholes they crawled out of.

To the German people: don’t let her sudden call for the banning of the burqa distract you from the fact that Merkel is a traitor to her country and should be arrested and tried for crimes against humanity.

As if to further spit in her party’s faces, she leaves the stage to shake hands with some of the illegal alien Muslim freeloaders, rapists, and potential jihadists she has invited into Germany.

But how many of them are already here?