The Independence Party emerged as the largest in the Althing, winning 21 of the 63 seats; the Progressive Party, which had won the most seats in 2013, lost more than half its seats as it was overtaken by the Left-Green Movement and the Pirate Party. Of the 63 elected MPs, 30 were female, giving Iceland the highest proportion of female MPs in Europe.[4]Parliamentary elections were held in Iceland on 29 October 2016. They were due to be held on or before 27 April 2017, but following the 2016 Icelandic anti-government protests, the ruling coalition announced that early elections would be held “in autumn”.

In early April 2016, following revelations in the Panama Papers, leaks from law firm Mossack Fonseca about the financial dealings of then Prime Minister Sigmundur Davíð Gunnlaugsson(Progressive Party) and his wife, there were calls for an early election from the opposition,[5] who planned to present him with a motion of no confidence. Mass protests calling on the Prime Minister to quit followed. Although Sigmundur Davíð had stated he had no intention of resigning, he apparently resigned on 5 April. However, it was later stated by the Prime Minister’s office that he had only taken a temporary leave of absence from his duties.[6][7][5][8][9] The Progressive Party’s deputy leader, Sigurður Ingi Jóhannsson, became acting Prime Minister the same day.[9]

The President, Olafur Ragnar Grimsson, then said he would speak to both coalition parties, Progressive Party and Independence Party, before considering whether to call new elections.[10] Opposition parties continued to press for new elections.[8] On 6 April, Sigurður announced, “We expect to have elections this autumn.”[11] On 11 August, Bjarni Benediktssonmet with opposition parties and later announced that elections would be held on 29 October 2016.[3]

The 63 members of the Althing were elected using closed list proportional representation in multi-member constituencies of 8 to 13 seats.[12] Of the 63 seats, 54 were elected using constituency results and determined using the d’Hondt method. The remaining nine supplementary seats were awarded to parties that crossed the 5% national electoral threshold in order to give them a total number of seats equivalent to their national share of the vote.[12]

The final deadline for parties to apply for participation in the parliamentary election was 14 October 2016.

Sigurður Ingi replaced Sigmundur Davíð as the party chairman of the Progressive Party on 2 October 2016.[13]

The Pirate Party announced on 16 October 2016 that they would not participate in post-election negotiations to form a coalition government with either the Progressive Party or the Independence Party.[14] The party did send letters to Viðreisn, Bright Future, Social Democratic Alliance and Left-Green Movement about the possibility of forming an alliance prior to the election.[14]

Graphical summary of the opinion polls in Iceland since the previous parliamentary election. Each dot corresponds to one poll’s number for party. A smoothing spline is used to show the trends. The scatter of points around the spline curves gives an indication of the uncertainty of the polls. The thin circles at the very right show the results of the election, which for P and D deviate significantly from the polls.

This was the lowest turnout in Iceland’s history.[15]

Neither of the two main blocs — the outgoing coalition of Independence and Progressive parties, or the Pirates and allies (Left-Green Movement, Bright Future and Social Democrats) — secured an overall majority, leaving the new Viðreisn party as possible ‘kingmakers’.[16]

The Independence Party were expected to take the lead in forming a new government, with their party leader, Bjarni, expressing preference for a three-party coalition, although without saying which three parties. The Pirate Party, while significantly up on the last election, did less well than polls had previously suggested they might. They proposed a five-party coalition with the Left-Green Movement, the Social Democrats, Bright Future and Viðreisn, having previously ruled out working with either of the two outgoing coalition members.[4] The Pirate Party then suggested a minority coalition of Left-Green Movement, Bright Future and Viðreisn, with support but not ministerial representation from themselves and the Social Democrats, in order to simplify the process of government.[17]

The leader of Viðreisn ruled out a right-leaning three-party coalition with Independence and the Progressives.[18] Viðreisn have not ruled out supporting the Pirates bloc.

The Independence Party (Icelandic: Sjálfstæðisflokkurinn) is a centre-rightpolitical party in Iceland.[5][6] Liberal conservative[7] and Eurosceptic,[7][8][9] it is the largest party in the Althing, with 21 seats. The chairman of the party is Bjarni Benediktsson and vice chairman is Ólöf Nordal. The secretary of the party is Áslaug Arna Sigurbjörnsdóttir.

It was formed in 1929 through a merger of the Conservative Party and the Liberal Party. This united the two parties advocating the dissolution of the Union of Denmark and Iceland, which was achieved in 1944, during the German occupation of Denmark. From 1929, the party won the largest share of the vote in every election until the 2009 election, when it fell behind the Social Democratic Alliance. Until Benediktsson took the leadership after the 2009 defeat, every Independence Party leader has also held the office of Prime Minister.

The Independence Party broadly encompasses all centre-right thought in Iceland. Economically liberal and opposed to interventionism, the party is supported most strongly by fishermen and high-earners,[10] particularly in Reykjavík.[11] It supports Icelandic membership of NATO but opposes the idea of joining the European Union (EU). It is a member of the International Democrat Union and it joined the Alliance of European Conservatives and Reformists (AECR) in November 2011, a centre-right eurosceptic European political party.

The Independence Party won the 2007 elections, increasing their seat tally in the Althing by 3. It formed a new coalition government under Haarde with the Social Democratic Alliance, after the Progressive Party lost heavily in the elections. In the 2009 elections, the party dropped from 25–26 to 16 seats in the Althing, becoming Iceland’s second-largest party following the Social Democratic Alliance (which gained two seats, to 20.)

The Independence Party re-entered government after the general elections in 2013, gaining 19 seats in parliament and the most votes again becoming Iceland’s largest party. The Independence Party hence formed a majority government with the Progressive Party with Benediktsson becoming Minister of Finance and Economic Affairs under the premiership of Sigmundur Davíð Gunnlaugsson chairman of the Progressive Party.

The party has been the sole major right-wing party in Iceland since its inception, and has captured a broad cross-section of centre-right voters. As a result, the party is not as far to the right as most right-wing parties in Scandinavia, serving as a ‘catch-all’ party.[14] The party, like the British Conservatives, states a claim to be primarily ‘pragmatic’, as opposed to ideological,[10][11][15] and its name is seen as an allusion to being independent of dogma.[16] For most of its period of political dominance, the party has relied upon coalition government, and has made coalitions with all major parties in parliament.[17]

The Independence Party has generally been economically liberal and advocated limited government intervention in the economy.[10] It was originally committed to laissez-faire economics, but shifted its economic policies left-wards in the 1930s, accepting the creation of a welfare state.[11]

The party has historically been less conservative on social issues than centre-right parties in Scandinavia.[11] Most significant legislative advances in LGBT rights have happened while the IP was in government.[18] The party was the only consistent advocate for the end of prohibition of beer, and provided three-quarters of voters in favour of legalisation; the ban was lifted in 1989.[19]

The party’s sceptic position on EU membership was confirmed at its national congress in March 2009.[20] Its near-permanent position as Iceland’s largest party has guaranteed Iceland’s Atlanticist stance.[21] The party is in favour of allowing Icelanders to participate in peacekeeping missions, including in Afghanistan.[22]

Historically the party has been the most successful right-wing party in the Nordic countries.[14] It has a broad base of support, but is most strongly supported by Iceland’s large fishing community and by businesses.[10] On the biggest divide in Icelandic politics, between urban and rural areas, the Independence Party is firmly supported by the urban population,[10] mostly found in Reykjavík.[11]

The Independence Party has always attempted to avoid appealing to a social class.[23] As such, the party is relatively successful at attracting working class voters,[17] which partly comes from the party’s strong advocacy of independence in the 1930s.[24] However, most of its strength is in the middle class,[19][25] and the party is disproportionately supported by those on high incomes and those with university educations.[10]

The party has long been endorsed by Morgunblaðið,[19] an Icelandic newspaper of record.[26] Davíð Oddsson, the longest-serving Prime Minister, is one of two editors of the paper. The paper was also historically supported by the afternoon newspaper Vísir, now part of DV.[11]

The party has a tradition of individualism and strong personalities, which has proven difficult for the leadership to manage. The Commonwealth Party split in 1941, while the Republican Party left in 1953, both in opposition to the leftwards shift of the party away from classical liberalism.[11] Neither splinter group managed to get seats in Althingi and vanished quickly. The Citizens’ Party split from the party in 1983, but collapsed in 1994.[15]

Its youth wing, Young Independents, is by far the largest youth organisation in Iceland, with over 12,000 members. It is slightly more classically liberal than the senior party.[27]

The party has a very large membership base, with 15% of the total population being a member of the party.[28]

For years the Independence party was a member of the EPP that include members like Høyre (Norway), Moderate Party(Sweden), UPM (France), the Kokoomus (Finland), and CDU (Germany). But with a new more eurosceptic leadership of the party it joined the Alliance of European Conservatives and Reformists (AECR) in November 2011, a centre-right eurosceptic political organization. Members of the AECR, includes among others, the British Conservative Party, Polish Law and Justice, and the Czech Civic Democratic Party. 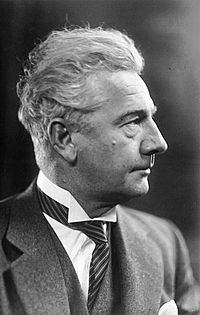 Olafur Thors was party leader from 1934 to 1961, making him the longest-serving leader in the party’s history.

All former chairmen of the party have held the office of the Prime Minister of Iceland: Ólafur Thors, Bjarni Benediktsson, Jóhann Hafstein, Geir Hallgrímsson, Þorsteinn Pálsson, Davíð Oddsson and Geir H. Haarde. Jón Þorláksson, the first chairman of the Independence party was Prime Minister for the Conservative party prior to the foundation of the Independence party. Gunnar Thoroddsen, who was the party’s vice chairman 1974–1981, was Iceland’s PM from 1980 to 1983, but the Independence Party did not officially support his government, although some MPs in the party did.