The capitals of the world’s two most populous nations, China and India, were blanketed in hazardous, choking smog on Monday as climate change talks began in Paris, where leaders of both countries are among the participants.

The choking pollution was caused by the “unfavourable” weather, the Ministry of Environmental Protection said on Sunday. Emissions in northern China soar over winter as urban heating systems are switched on and low wind speeds have meant that polluted air has not been dispersed.

In New Delhi, the U.S. embassy’s monitoring station recorded an air quality index of 372, which puts air pollution levels well into “hazardous” territory. A thick smog blanketed the city and visibility was down to about 200 yards (metres).

Air quality in the city of 16 million is usually bad in winter, when coal fires are lit by the poor to ward off the cold. Traffic fumes, too, are trapped over the city by a temperature inversion and the lack of wind.

However, the government has not raised any alarm over the current air quality and no advisories have been issued to the public. Thirty thousand runners took part in a half marathon at the weekend, when pollution levels were just as high.

In Beijing, a city of 22.5 million, the air quality index in some parts of the city soared to 500, its highest possible level. At levels higher than 300, residents are encouraged to remain indoors, according to government guidelines.

The hazardous air underscores the challenge facing the government as it battles pollution caused by the coal-burning power industry and will raise questions about its ability to clean up its economy at the talks in Paris.

Chinese President Xi Jinping and Indian Prime Minister Narendra Modi are both in Paris and both were scheduled to meet U.S. President Barack Obama on Monday to give momentum to the two-week negotiations.

“WHEN A CHILD IS BORN, WE PLANT A TREE”

Modi sought to highlight India’s green credentials in an article for the Financial Times on Monday, writing: “The instinct of our culture is to take a sustainable path to development. When a child is born, we plant a tree.”

But at Connaught Place, a city centre landmark in New Delhi, people chided the government for failing to minimise the risks to their health from air pollution.

“This sort of weather, you can see that all of Beijing has been completely enveloped in smog…and for every breath, getting up every morning, your throat will feel particularly uncomfortable,” said Zhang Heng, a 26-year-old architect.

The Beijing Environmental Protection Bureau said on Sunday that it had requested factories to limit or suspend output and had also stopped construction work throughout the city.

The ministry said the number of cities affected by heavy pollution had reached 23, stretching across 530,000 square km, an area the size of Spain, but a cold front beginning on Wednesday would see the situation improve.

China launched a “war on pollution” last year following a spate of smog outbreaks in Beijing and surrounding regions.

China has vowed to slash coal consumption and close down polluting industrial capacity, but environmental officials admit that the country is unlikely to meet state air quality standards until at least 2030.

Reducing coal use and promoting cleaner forms of energy are set to play a crucial role in China’s pledges to bring its climate warming greenhouse gas emissions to a peak by around 2030. 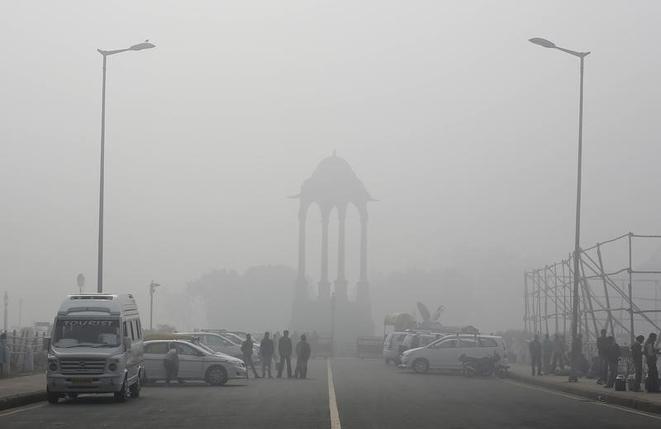