Georgia‘s state law requires the Governor of Georgia to call for a special election to be held at least 30 days after a vacancy. Following Price’s resignation, Governor Nathan Deal called for the special election to be held on April 18,[1] with a filing window for prospective candidates from February 13 to 15, 2017.[2] All candidates ran on one ballot, with a runoff election scheduled for the first- and second-place finishers, if no candidate received 50% of the vote.[3] Democratic candidate Jon Ossoff and Republican candidate Karen Handel finished first and second in a crowded field with neither receiving a majority and faced off in the June 20 runoff election. Handel prevailed in the runoff election.Karen Handel defeated Jon Ossoff in the special election runoff on June 20, 2017, to determine the member of the United States House of Representatives for Georgia’s 6th congressional district. Republican Tom Price resigned from the seat following his appointment and confirmation as the United States Secretary of Health and Human Services in the Trump Administration. The runoff election followed the single-ballot special election held on April 18, 2017 when no individual candidate earned the majority of votes.

The election has attracted exceptional national interest, with both major parties perceiving it as an opportunity to shape the political narrative prior to the 2018 midterm elections.[4][5] A total of $50 million was spent as of the close of early-voting period on June 17, making it the most expensive House election in history.[6]Of that, more than $40 million was spent on television and radio advertising alone, smashing past House election records.[7] A very high number of voters—140,000—cast ballots during the runoff-election early-voting period, and an Atlanta Journal-Constitution poll found that 92 percent of voters said they were watching the race “closely.”[6]

On June 20, 2017, Handel won the special election runoff and defeated Ossoff 51.87% to 48.13%. Following reports of the election results, The New York Times characterized the race as “demoralizing for Democrats”

No candidate received 50% of the vote in the special election. The top two candidates, Jon Ossoff and Karen Handel, faced off in the June 20 runoff election.[citation needed]

The race was called for Karen Handel at around 10:15 pm by the Associated Press. Ossoff conceded the race shortly thereafter.

Upon the announcement of incumbent Representative Xavier Becerra‘s selection as Attorney General of California, John Pérez, the former Speaker of the California State Assembly, announced his candidacy to succeed him in the House of Representatives.[2] He soon withdrew from the race, citing a recent health diagnosis.[4]

Montana‘s state law required the Governor of Montana to call for a special election to be held no less than 85 and no more than 100 days after the vacancy.[3] Governor Steve Bullock declared a special election to take place on May 25, the earliest possible day he was legally allowed to choose.[1]A special election is being held on May 25, 2017, to determine the member of the United States House of Representatives for Montana’s at-large congressional district. The election was necessitated by Incumbent Republican Representative Ryan Zinke‘s appointment as United States Secretary of the Interior. Zinke resigned on March 1, 2017, upon his confirmation.[1] At around 10:30pm MST, the election was called for Greg Gianforte after 77% of the votes were counted. [2]

The Democratic Party selected a nominee at a convention on March 5.[24]

The Bozeman Daily Chronicle from February 4 to 8 conducted a straw poll of Democratic delegates.[25] Of 89 delegates that responded, Rob Quist was selected by 37, Amanda Curtis 30, Kelly McCarthy 13, 9 were undecided, and zero delegates selected John Meyer or other.[25]

The Libertarian Party Convention on March 11, 2017 was held at Eagle’s Lodge in Helena, Montana.[42]

The following county affiliate parties were represented at the convention:

Officers of the Libertarian Party of Montana and delegates from the assembled counties had voting rights.

The Green Party Convention on March 4, 2017 was held at the University of Montana‘s Payne Family Native American Center.[46]

Breck, along with two independent candidates, won a lawsuit in U.S. District Court against the Montana Secretary of State, ruling Montana’s ballot access laws to be unconstitutional in the case of special elections. The District Court Judge ruled to change the original requirement to submit 14,268 ballot petition signatures, reducing that requirement to 400 signatures. The US Court decision failed to provide further remedy and Breck’s name was not placed on the ballot despite injunctive appeals to the Ninth Circuit Court and U.S. Supreme Court. Breck subsequently endorsed Independent write-in candidate Doug Campbell who was a co-plaintiff in the suit.[47][48][49]

The night before the election, Gianforte allegedly physically assaulted Ben Jacobs, a reporter from The Guardian, in front of multiple witnesses, knocking him down, punching him, and breaking his glasses.[50] The reporter had barged into the room where Gianforte was about to conduct an interview with Fox News, in order to ask Gianforte about the newly released Congressional Budget Office report on the American Health Care Act of 2017. According to an eye witness account by the Fox News team that was also in the room at the time, Jacob’s entered the room uninvited rather than wait in the adjacemt room, and put a voice recorder in front of Gianforte, repeatedly asking a question to which Gianforte offered to answer after his interview with Fox. When Jacobs persisted, Gianforte directed Jacobs to his press secretary, and when Jacobs still continued, Gianforte suddently jumped from his seat and physically attacked Jacobs. [51] Gianforte was subsequently charged with misdemeanor assault.[52][53] The editorial boards of the Billings Gazette, the Independent Record, and the Missoulian rescinded their endorsements of Gianforte.[54]

The Gianforte campaign released a statement following the incident alleging the incident was caused by, “this aggressive behavior from a liberal journalist”, a claim contradictary to the eyewitness account of the Fox News team present in the room at the time. Fox reporter Alicia Acuna stated that while Jacobs was acting in a somewhat combative fashion, he was not outwardly aggressive, and certainly did not physcially engage Gianforte before being body-slammed by the Republican candidate.[55]

The Democratic Party and the mainstream media have thrown their full force behind the election of a 30-year-old political novice, Jon Ossoff, in a special election being held in Georgia today to fill the vacant Congressional seat of Tom Price who joined the Trump administration as Health and Human Services Secretary.

Ossoff is the lone Democrat running against a field of 17 Republicans so there is little doubt that he’ll ‘win’ today’s election.  The question, however, is whether he’ll secure the 50% of votes required to avoid a runoff against the Republican front-runner, which looks increasingly likely to be Karen Handel or Bob Gray, in June.  And, with polling data from Emerson showing him at ~43%, not to mention the fact that not a single poll has put him anywhere near the 50% threshold, it’s looking like a long shot for Dems.

But, if Ossoff loses it won’t be for a lack of trying.  The Democratic candidate raised $8.3 million in Q1 2017 from disaffected Hillary voters which is a fairly staggering number for a first-time candidate running for a seat that will do absolutely nothing to shift the balance of power in the House.  That said, Democrats and the MSM want a referendum vote on Trump and they seem to be willing to spend any amount of money and resources required to get it.  Per The Hill:

The DCCC dispatched eight staffers to Georgia to build out what’s become a field team of more than 70 paid staffers. The House Democrats’ campaign wing has also made a handful of six-figure ad and mail buys looking to drum up turnout and push Ossoff to an outright victory in the primary. Democratic National Committee Chair Tom Perez also recorded a robocall.

Progressive Democrats have backed Ossoff, too. The Progressive Campaign Committee and liberal blog Daily Kos helped to bundle money and rally support, while Democracy for America endorsed him.

“This race is seen as a referendum on two things: one, on how well the Trump presidency is doing and if there are any Republicans upset enough to want to send a message. And two, a referendum on whether the Democratic Party can actually flip some districts,” said Richard Barke, a political science professor at Georgia Tech who lives in the district. “It looks like it’s in play, but the question will be all about who turns out.”

Of course, with a campaign slogan of “Make Trump Furious”, it’s clear that Democrats are in no way influenced by local issues related to Georgia’s 6th Congressional District.  That said, the slogan does seem to be working…

With eleven Republican candidates running in Georgia (on Tuesday) for Congress, a runoff will be a win. Vote “R” for lower taxes & safety!

Democrat Jon Ossoff would be a disaster in Congress. VERY weak on crime and illegal immigration, bad for jobs and wants higher taxes. Say NO

Republicans must get out today and VOTE in Georgia 6. Force runoff and easy win! Dem Ossoff will raise your taxes-very bad on crime & 2nd A.

Meanwhile, it has just been revealed that while Ossoff is running for the 6th Congressional District in Georgia, he won’t be able to vote for himself as he doesn’t even live in the district.  Of course, an equally important question raised by the interview below is, since when does a newbie candidate running in a tiny Georgia congressional district, that will have no impact of the Republican majority in the House, get national airtime on CNN?

In the end, Democrats already seem to realize they’re likely to come up short of the 50% threshold so they’re seemingly encouraging the proven liberal strategy of voting ‘early and often’ with the slogan ‘Vote Your Ossoff’…very clever except that it may be a bit too soon to be openly encouraging voter fraud…you know, because of that whole Project Veritas thing. 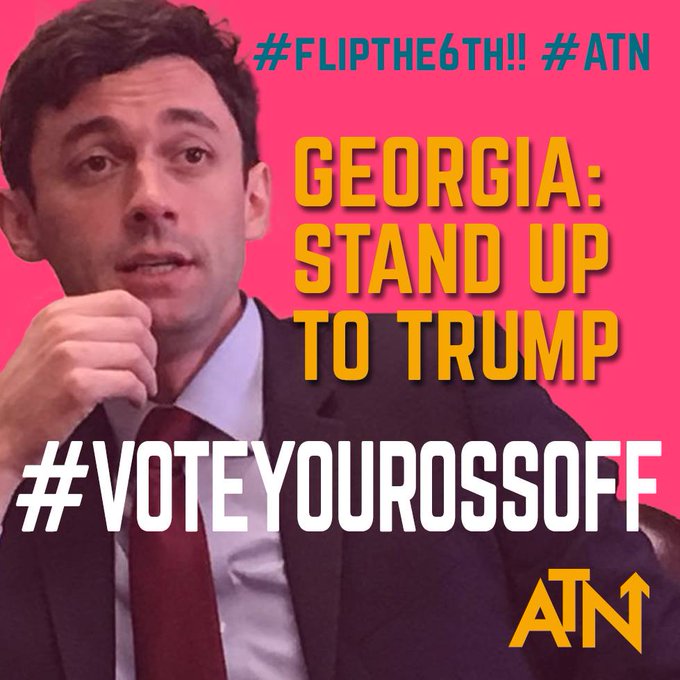