The Independence Party emerged as the largest in the Althing, winning 21 of the 63 seats; the Progressive Party, which had won the most seats in 2013, lost more than half its seats as it was overtaken by the Left-Green Movement and the Pirate Party. Of the 63 elected MPs, 30 were female, giving Iceland the highest proportion of female MPs in Europe.[4]Parliamentary elections were held in Iceland on 29 October 2016. They were due to be held on or before 27 April 2017, but following the 2016 Icelandic anti-government protests, the ruling coalition announced that early elections would be held “in autumn”.

In early April 2016, following revelations in the Panama Papers, leaks from law firm Mossack Fonseca about the financial dealings of then Prime Minister Sigmundur Davíð Gunnlaugsson(Progressive Party) and his wife, there were calls for an early election from the opposition,[5] who planned to present him with a motion of no confidence. Mass protests calling on the Prime Minister to quit followed. Although Sigmundur Davíð had stated he had no intention of resigning, he apparently resigned on 5 April. However, it was later stated by the Prime Minister’s office that he had only taken a temporary leave of absence from his duties.[6][7][5][8][9] The Progressive Party’s deputy leader, Sigurður Ingi Jóhannsson, became acting Prime Minister the same day.[9]

The President, Olafur Ragnar Grimsson, then said he would speak to both coalition parties, Progressive Party and Independence Party, before considering whether to call new elections.[10] Opposition parties continued to press for new elections.[8] On 6 April, Sigurður announced, “We expect to have elections this autumn.”[11] On 11 August, Bjarni Benediktssonmet with opposition parties and later announced that elections would be held on 29 October 2016.[3]

The 63 members of the Althing were elected using closed list proportional representation in multi-member constituencies of 8 to 13 seats.[12] Of the 63 seats, 54 were elected using constituency results and determined using the d’Hondt method. The remaining nine supplementary seats were awarded to parties that crossed the 5% national electoral threshold in order to give them a total number of seats equivalent to their national share of the vote.[12]

The final deadline for parties to apply for participation in the parliamentary election was 14 October 2016.

Sigurður Ingi replaced Sigmundur Davíð as the party chairman of the Progressive Party on 2 October 2016.[13]

The Pirate Party announced on 16 October 2016 that they would not participate in post-election negotiations to form a coalition government with either the Progressive Party or the Independence Party.[14] The party did send letters to Viðreisn, Bright Future, Social Democratic Alliance and Left-Green Movement about the possibility of forming an alliance prior to the election.[14] 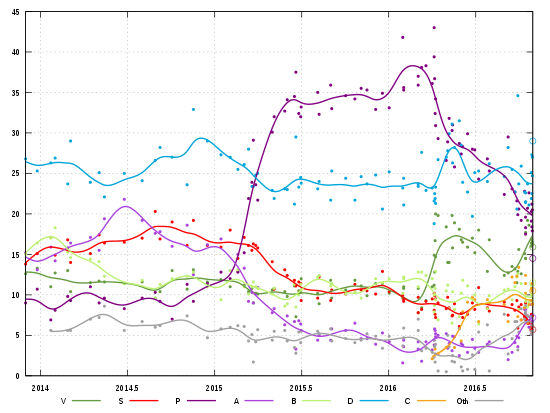 Graphical summary of the opinion polls in Iceland since the previous parliamentary election. Each dot corresponds to one poll’s number for party. A smoothing spline is used to show the trends. The scatter of points around the spline curves gives an indication of the uncertainty of the polls. The thin circles at the very right show the results of the election, which for P and D deviate significantly from the polls.

This was the lowest turnout in Iceland’s history.[15]

Neither of the two main blocs — the outgoing coalition of Independence and Progressive parties, or the Pirates and allies (Left-Green Movement, Bright Future and Social Democrats) — secured an overall majority, leaving the new Viðreisn party as possible ‘kingmakers’.[16]

The Independence Party were expected to take the lead in forming a new government, with their party leader, Bjarni, expressing preference for a three-party coalition, although without saying which three parties. The Pirate Party, while significantly up on the last election, did less well than polls had previously suggested they might. They proposed a five-party coalition with the Left-Green Movement, the Social Democrats, Bright Future and Viðreisn, having previously ruled out working with either of the two outgoing coalition members.[4] The Pirate Party then suggested a minority coalition of Left-Green Movement, Bright Future and Viðreisn, with support but not ministerial representation from themselves and the Social Democrats, in order to simplify the process of government.[17]

The leader of Viðreisn ruled out a right-leaning three-party coalition with Independence and the Progressives.[18] Viðreisn have not ruled out supporting the Pirates bloc.

The Pirate Party (Icelandic: Píratar) is a political party in Iceland. The party’s platform is based on pirate politics and direct democracy.

The party was cofounded on 24 November 2012 by Birgitta Jónsdóttir(previously a member of the Movement), and several prominent Internet activists, including Smári McCarthy.[3][4][5][6] The party successfully applied for the ballot list letter Þ (resembling the party’s logo) in order to run in the 2013. In July 2016 the party requested and was issued the letter P for future elections.

In their first electoral participation, at the 2013 parliamentary election, the Pirate Party won 5.1% of the votes, just above the 5% threshold required to win representation in the Althing.[3] The three members elected, Birgitta Jónsdóttir, Helgi Hrafn Gunnarsson and Jón Þór Ólafsson, were the first pirates elected to any national legislature in the world.[7][8]

Following the Charlie Hebdo shooting on 7 January 2015, the Pirate Party began a campaign to repeal Iceland’s blasphemy laws. The laws, which had been introduced in 1940, were successfully repealed in early July 2015. The repeal, introduced by the Pirate Party, read: “Freedom of expression is one of the cornerstones of democracy. It is fundamental to a free society that people should be able to express themselves without fear of punishment, whether from the authorities or from other people.”[9] During the vote on the repeal, the three Pirate Party members of the Althing stood and declared “Je suis Charlie“, in solidarity with the French satirical magazine.

For around a year from April 2015 to April 2016, the party consistently topped polling for the next Icelandic parliamentary election in 2016, with support roughly equal to the Independence Party and the Progressive Party combined, who are currently partners in a coalition government.

An MMR opinion poll published in January 2016 put their public support at 37.8%, significantly above that of all other Icelandic political parties.

In April 2016 public protests about the Prime Minister’s role in the Panama Papers brought out a significant percentage of the whole population, and may have been among “the largest demonstrations of any kind, in any country, ever (proportionately speaking)”.[15] In the wake of the Panama Papers scandal, polls in April 2016 showed the Pirate Party at 43% and the Independence Party at 21.6%.[16]

A poll by the Social Science Research Institute of the University of Iceland with data from 14–19 October 2016 put the Pirate Party in first place in the general election on the 29th of October 2016 with 22.6% of the vote.[17]

Main article: Accession of Iceland to the European Union

On 4 July 2013, a bill was introduced in parliament that would, if passed, immediately grant Edward Snowden Icelandic citizenship. The proposer of the bill was Helgi Hrafn Gunnarsson (Pirate Party) and it was co-sponsored by the other Pirate Party parliament members, Ögmundur Jónasson (Left-Green Movement), Páll Valur Björnsson (Bright Future) and Helgi Hjörvar (Social Democratic Alliance).[20][21][22][23] A vote was taken to determine whether the bill would be put on parliament’s agenda but it did not receive enough support.