From Wikipedia, the free encyclopedia
Not to be confused with Kappa Alpha Order.

The Kappa Alpha Society (ΚΑ), founded in 1825, was the progenitor of the modern fraternity system in North America. It was the first of the fraternities which would eventually become known as the Union Triad. In addition, Baird’s Manual states that ΚΑ, unlike other fraternities with claims to the contrary, has maintained a continuous existence since its foundation, making it the oldest undergraduate fraternity that exists today.[1] As of 2012, there are nine active chapters in the United States and Canada.

According to Baird’s Manual, nine undergraduates at Union College inSchenectady, New York—John Hart Hunter, John McGeoch, Isaac W. Jackson, Thomas Hun, Orlando Meads, James Proudfit, and Joseph Anthony Constant of the class of 1826, and Arthur Burtis and Joseph Law of the Class of 1827—established the Society on November 26, 1825 from an informal group calling itself The Philosophers, which was established by Hunter, Jackson, and Hun in 1823. The organization represents the middle link between secret societies, literary societies, and Greek-letter organizations like Phi Beta Kappa. In the words of founding member Arthur Burtis:

The first expansion of the Society took place in 1833 at Williams College at the request of fourteen students led by Azariah S. Clark of the class of 1834.

This organization is not to be confused with the Kappa Alpha Order, a completely separate national fraternity.

Chapters are designated with an abbreviation of the institution’s Latin name.

The Union and Wesleyan chapters were co-educational (male and female members) in the recent past. The chapter at Wesleyan University, which existed from 1967 to about 1997, was at various times co-educational both as part of The Society and as a local starting in 1974. The Union Chapter was co-ed from 1991 until 2003. There are currently no co-educational chapters.

Over the course of its nearly 200-year history, The Kappa Alpha Society has produced a substantial number of notable members in widely varied fields.

Delta Phi (ΔΦ) is a fraternity founded in 1827 at Union College inSchenectady, New York. Founded as part of the Union Triad, along with theKappa Alpha Society and Sigma Phi Society, Delta Phi was the third and last member of the Triad.

Delta Phi and the other fraternities of the Union Triad were established during a time of strong anti-Masonic sentiment in the United States. Because fraternities were secret societies at the time, they also became targets of the anti-Masonic movement. This led Phi Beta Kappa, the original fraternity, to abandon secrecy and become an honor society.

In the early 1830s, Dr. Eliphalet Nott, president of Union College, called for the dissolution of all fraternities. Before this policy could be enacted, John Jay Hyde, a member of Delta Phi, argued the benefits of the fraternity system so convincingly that Nott relented and permitted the organizations to remain in existence. Hyde went on to design the badge still worn by members of Delta Phi, which includes a Maltese Cross, a symbol used by the Knights of Malta.

This connection to the Knights of Malta led Delta Phi to become known as “The St. Elmo Club”, a name first used by theOmicron chapter at Yale University, which since has transformed into a senior secret society known as St. Elmo Society. The brothers there used the name of St. Elmo, the patron saint of mariners and the Knights of Malta. Some of Delta Phi’s chapter houses are also known as “St. Elmo Hall”. 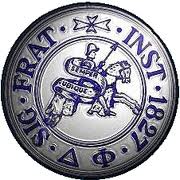 Delta Phi remains a small fraternity with twelve active chapters and few chapters with more than several dozen members. It has resisted expansion in order to create an “intimate, personal experience”[1] for its members. The fraternity’s current expansion policy is to reactivate dormant chapters.[1] As a member of the Union triad, Delta Phi is the third oldest fraternity in the United States. Sigma Phi’s recognition as a secret society as opposed to a social fraternity makes Delta Phi the oldest continuous “social” fraternity in existence, while Sigma Phi is the oldest continuous collegiate Greek letter society overall.

Owing mostly to its development in the early 19th century, Delta Phi organizes itself federally. Individual alumni chapters still exercise significant power over chapter governance. Those powers that are given in the national organization are vested in the Board of Governors.[2] The Board consists of one member appointed from each alumni chapter plus two undergraduate representatives elected at the annual leadership conference the fraternity sponsors.[2] Among the duties given to the board is hiring the Executive Director who oversees day-to-day management of the fraternity.[2]

In addition to the national governing organization of the fraternity, Delta Phi alumni have also established the Saint Elmo Foundation which, among other things, sponsor’s the annual leadership weekend and provides scholarships to undergraduate members of Delta Phi.[3]

Alumni status in Delta Phi also qualifies one to apply for membership in the Saint Elmo Club,[6] a private social club which operates at 3 West 51st Street in the Manhattan borough of New York City.[6]

On or about November 17 of every year, the national organization sponsors the Founder’s Day Dinner at the Saint Elmo Club where undergraduates and alumni celebrate the founding of the fraternity.[7]

There are 13 active chapters of Delta Phi.[8]

[*] An active fraternity that is no longer affiliated with national organization

There are 14 inactive chapters of Delta Phi including the Beta Chapter.[10]

Chi Psi Fraternity (ΧΨ) is a fraternity and secret society consisting of 32 active chapters (known as “Alphas”) at 32 American colleges and universities. The mission of the Chi Psi Fraternity is to create and maintain an enduring society which encourages the sharing of traditions and values, respect for oneself and others, and responsibility to the university and community.

Chi Psi was founded on Thursday May 20, 1841, by 10 students at Union College with the idea of emphasizing the fraternal and social principles of a brotherhood. It was the first Greek-letter organization to be founded on these grounds, rather than the literary characteristics of the seven then-existing societies. In 1854, Chi Psi was the first fraternity in the nation to establish afraternity house. The first fraternity house was located at the University of Michigan. Thanks to the building’s resemblance to a hunting lodge, Chi Psi now refers to all its houses as Lodges.[1] Chi Psi Fraternity is the 8th fraternity to be founded in the United States.

Values and the Chi Psi Gentleman[edit]

Chi Psi is founded upon the fraternal aspects of brotherhood and embraces a number of values in its pursuit to establish this brotherhood. These values were first adopted at its founding in 1841, and later, a restatement of principles was given at the 122nd National Convention in 1963. Some of these values are as follows: Chi Psi is defined by the values which are collectively accepted by its members. The extent to which these values are practiced is the measure of our fraternity; Chi Psi is committed to the growth of the individual in a social environment which nurtures integrity, dignity and maturity while enjoying shared experiences and college sociability; and Chi Psi recognizing that academic achievement is fundamental to the development of the individual, stands for intellectual growth and the attainment of human potential.[2]

Chi Psi also embraces the idea of being a true gentleman, by following the definition of a gentleman as put forward by John Walter Wayland’s ‘The True Gentleman’:

In pursuit of the values the fraternity put forth and in order to make up for a lack of leadership opportunities available on college campuses, the Chi Psi Educational Trust has funded the Program for Excellence. Consisting of numerous sessions and workshops the Program for Excellence focuses on instilling the members of Chi Psi with a respect for themselves, the people they are around, and their community.[4][5]

The Chi Psi newsletter, ‘The Purple & Gold’ was first published in November 1883, and is currently received by all current brothers on a lifetime subscription.[6]

Chi Psi has 32 chapters, which are known as Alphas, at American colleges and universities.