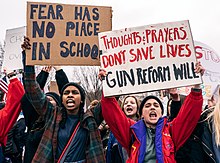 Shortly after the attack, public comment returned to gun politics. Several student survivors criticized the response, asking politicians to get things done to prevent more children from dying in shootings rather than just offer condolences. Some of these students have demanded tighter gun control as a course of action.[85][86] Student and survivor Emma González was noted for her speech rebuking “thoughts and prayers” from the government and the President.[87][88] She has since emerged as one of the teenage leaders of a protest movement against gun violence in the United States.[89]One of the teachers said there were so many casualties even after the people at the school had done all they were supposed to do. She felt the government had not done enough to keep the students at her school safe.[2][23][90] Broward County SchoolsSuperintendent Rob Runcie said, “now is the time to have a real conversation about gun control legislation”.[59][91]

Broward County Sheriff Scott Israel called on lawmakers to amend the Baker Act to allow police to detain and hospitalize people who make disturbing posts on social media, not just clear threats. “I’m talking about being around bombs, possibly talking about ‘I want to be a serial killer,’ talking about taking people’s lives,” he said. “Just taking a picture with a gun or a knife or a weapon – that in and of itself is clearly not even remotely something that we’re concerned about.”[92]

Some of the Stoneman Douglas student survivors organized a group called Never Again MSD in the aftermath of the shooting, which began on social media using the hashtag #NeverAgain.[93][94] The group has demanded legislative action to prevent similar shootings and has vocally condemned U.S. lawmakers who have received political contributions from the National Rifle Association (NRA).[95][96] On February 17 in Fort Lauderdale, the group held a rally attended by hundreds of supporters.[97][98]

Since the shooting, several more rallies have been planned to take place with the focus on legislative action. The Women’s March Network is planning a 17-minute school walkout on March 14.[99][100] “March for Our Lives” is planned for March 24 and intends to be a nationwide student demonstration. The event will include a march in Washington, D.C.[101][102][103] On April 20, the anniversary of the Columbine High School massacre, all-day walkouts are planned for teacher groups by Diane Ravitchand David Berliner,[104] and for student groups by Lane Murdock of Ridgefield High School.[105]

On 20 February 2018, dozens of Stoneman Douglas High School students went to the State Capital in Tallahassee and watched as the Florida House of Representatives rejected a bill that would have banned assault weapons. Students strongly criticized the vote. The bill’s sponsor, Carlos Guillermo Smith, noted the peculiarity of the timing of the rejection both because of the tragedy at Stoneman Douglas High School and because the Florida House of Representatives had just recently passed a bill declaring that pornography is a public heath risk.[106]

The Enough! National School Walkout[6] is a walkout being planned by organizers of the Women’s March, scheduled for March 14, in response to the Stoneman Douglas High School shooting. The protest will have students, parents, and gun control supporters leaving schools for seventeen minutes starting at 10:00am in their respective time zone.[7][8]

Main article: March for Our Lives

Another national walkout is scheduled for April 20.[11] On the anniversary of the Columbine High School massacre, all-day walkouts are planned by teacher groups called National Day of Action Against Gun Violence in Schools[12] with Diane Ravitch and David Berliner,[13][14] and by student groups called National School Walkout[15] with Lane Murdock of Ridgefield High School.[16][17][18]