Golf at the 2016 Summer Olympics in Rio de Janeiro, Brazil, was held in August at the new Olympic Golf Course (Portuguese: Campo Olímpico de Golfe), built within the Reserva de Marapendi in the Barra da Tijucazone.

The 2016 Summer Olympics was the first time for golf to be played at the Olympics since the 1904 Summer Olympics[1] and it is to feature two events, the men’s and women’s individual events.

Though golf has not featured in the Olympics since the 1904 Summer Olympics, the session of the 121st IOC Session held in 2009 chose to re-introduce the sport for the games.[2] With the rapid expansion and globalisation of the sport, the 121st International Olympic Committee recommended adding golf back into the Summer Olympics.

Prior to the vote to reinstate golf into the 2016 and 2020 Summer Olympic Games, a presentation by a group of golf ambassadors helped sway the 121st session of the International Olympic Committee. These ambassadors included: Dawson and Votaw, along with four pro golfers: 3-time major champion Pádraig Harrington of Ireland, Michelle Wie of the United States, Women’s PGA Champion Suzann Pettersen of Norway and 16-year-old 2009 British Amateur championMatteo Manassero of Italy.[4] Dawson was quoted saying: “We are extremely grateful that Padraig, Michelle, Suzann and Matteo were able to join us to help communicate the genuine interest world-class players of all ages share in golf becoming an Olympic sport.” On 9 October 2009, the International Olympic Committee had their final vote and the vote passed, which officially made golf an Olympic sport for the 2016 and 2020 Summer games.[5]

The 120 (60 men and women) competitors played two separate (one for men, one for women) 72-hole (i.e. 4 rounds of 18 holes) individual stroke play tournaments under the official rules of golf. In the event of a tie for any of the first three positions, a three-hole playoff would have determined the medal winners.[2]

The golf course as of December 2015. The surrounding Reserva de Marapendiseen in the foreground and at right.

The new Olympic golf course was built at the Reserva de Marapendi in theBarra da Tijuca zone. Hanse Golf Course Design was chosen from eight contenders to build the course. Founder and President Gil Hanse reacted to the news in saying: “I’m excited that the selection panel felt that our efforts were the ones that best matched the criteria set by organisers.”[8] They have signed up with World Golf Hall of Famer Amy Alcott to work on the project.[needs update]

The president of the Organizing Committee of the Olympic and Paralympic Games Rio 2016, Carlos Arthur Nuzman, said: “As [the 2016 Games] marks the return of golf to the Olympic Games after over a century of absence, this course represents the beginning of a new chapter in the history of the sport. It will enable Rio to host important events in the international calendar and it would be an example of sustainability and preservation of an environmentally protected area. This course will be an excellent facility for the practice and development of golf and will inspire millions of youth across Brazil and the globe. We look forward to welcoming the athletes and spectators to the course in 2016.”[this quote needs a citation]

After the games, the course would become a public facility and would be used to enhance golf’s profile within Brazil; according to the organising committee, this would represent “one of the most important Olympic Games legacies for sport development in the country.”[9]

The Olympic Committee said that one of their goals for the Olympics was to create an environmentally sustainable Games. In building the golf course, the grass selection was critical for sustainability and water use. The quality of the water as an irrigation source for the course was in question, so the grasses selected had to be salt-tolerant. The grass sprigged on the greens of the course was SeaDwarf Seashore Paspalum, a highly salt-tolerant grass variety. The grass planted on the tees and fairways is Zeon Zoysia, developed by Bladerunner Farms in Poteet, Texas. Zeon Zoysia is a warm-season turfgrass that requires little fertilizer and minimal[clarification needed] maintenance. Both grasses were grown on a sod farm in Brazil at Green Grass Brasil. The sod farm was a licensed producer of both grass varieties.[citation needed]

Qualification will be based on world ranking as of 11 July 2016, with a total of 60 players qualifying in each of the men’s and women’s events.[11] The top 15 players of each gender will qualify, with a limit of four golfers per country that can qualify this way.[12][13] The remaining spots will go the highest-ranked players from countries that do not already have two golfers qualified.[14] The IGF has guaranteed that at least one golfer from the host nation and each geographical region (Africa, the Americas, Asia, Europe, and Oceania) will qualify.[13][15] The IGF posts weekly lists of qualifiers based on current rankings for men[16] and women.[17]

A number of golfers withdrew, for reasons including the Zika virus epidemic and their schedules, while others were not selected by their national Olympic committee. Top male golfers withdrew in larger numbers than top female golfers. Some said that women’s golf needed the exposure from the Games far more than men’s golf.[18] Missing eligible golfers, with their rankings at the qualification date, were:

Both male and female golfers cited the Zika virus as cause to withdraw from the Games. The virus can live longer in semen than in blood, and might thus infect a male golfer’s partner for up to six months later or even more, therefore also causing birth defects this way. Other reasons for the withdrawals have been suggested. 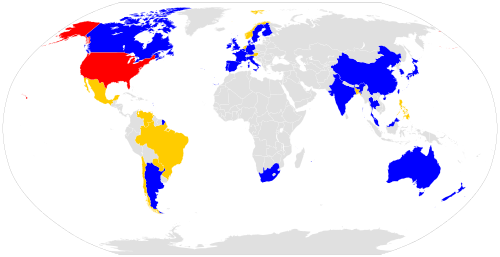 Number of male golfers from each country participating in the 2016 Summer Olympics:

Four
Two
One
None

Number of female golfers from each country participating in the 2016 Summer Olympics:

Four
Three
Two
One
None