From Wikipedia, the free encyclopedia
“Monday Night Massacre” redirects here. It is not to be confused with various American football games in the History of Monday Night Football. 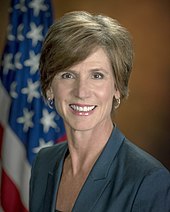 Sally Yates, who as appointed by Obama administration, was the Acting United States Attorney General from January 20, 2017 until her dismissal by President Donald Trump on January 30, 2017.

The dismissal of Sally Yates refers to U.S President Donald Trump dismissed acting Attorney General Sally Yates on January 30, 2017. Trump also demoted and replaced acting Immigration and Customs Enforcement director Daniel Ragsdale. The move was labeled the “Monday Night Massacre” by a number of politicians, political commentators and news reports,[1] while the use of the term was questioned by others.[2][3] The name alludes to the 1973 Saturday Night Massacre, during the Watergate scandal, when Attorney General Elliot Richardson and Deputy Attorney General William Ruckelshaus both resigned after refusing to carry out President Richard Nixon‘s order to dismiss special prosecutorArchibald Cox.[1]

The firing of acting Attorney General Sally Yates, a career prosecutor appointed by President Barack Obama, followed her refusal to defend Trump’s executive order banning the entry of nationals from seven predominantly Muslim countries because she was not convinced the executive order was lawful.[4] This came after several federal courts issued stays on various parts of Trump’s executive order to stop them from being put into effect and many U.S. Customs and Border Protection agents did not follow the stays.[5] Trump replaced Yates with Dana Boente, the United States Attorney for the Eastern District of Virginia. After taking office, Boente ordered the Justice Department to enforce the executive order.[6] 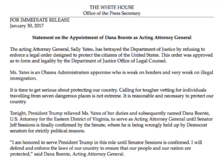 In a White House statement, Yates was said to have “betrayed the Department of Justice by refusing to enforce a legal order designed to protect the citizens of the United States” and to be “very weak on borders and very weak on illegal immigration”.[7][8] Senate Minority Leader Chuck Schumer spoke on the Senate floor that evening, and called her firing a “Monday night massacre”.[8] Watergate investigative journalist Carl Bernstein, speaking on CNN, rejected the comparison, saying, “There’s a big difference, because the Saturday Night Massacre was really about firing the attorney general when Nixon was the target of an investigation and was actively obstructing justice”, he also stated that, “I think the president is within his rights here to fire the attorney general, that he has that ability.”[9]

Many Trump critics praised Yates for standing up against what they perceived as an unconstitutional executive order, but some legal experts including Alan Dershowitz, Michael Gerhardt and Jonathan Adler questioned Yates’s decision.[3][10] Some critics also believed the rhetoric of “betrayal” Trump used in his letter to the former attorney general was unnecessarily incendiary.[11]